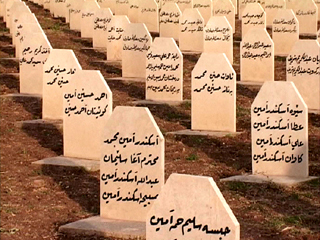 Halabja has become synonymous with the brutality of Saddam's regime. But the suffering of its residents has not ended with the dictator's fall.

"Every time I breathe, I get pains in my chest. My eyes burn like fires," describes Aras Abid Akram. He will never forget what happened on 16 March 1988. As punishment for failing to resist Iran, Saddam ordered a three wave attack on Halabja. First the army fired mortars on the city. Then planes dropped napalm before the final attack of nerve and mustard gas. "Our skin began to itch horribly and became red," he recalls. Over 5,000 people were killed, including 42 members of Aras's family. Many of those who survived were scarred for life. Half the population suffers from breathing problems and the cancer rate is twice as high as the rest of the country. Children are born with cleft palates and other deformities.
FULL SYNOPSIS
TRANSCRIPT