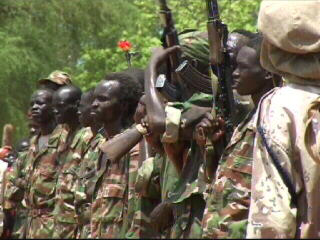 "The first task ahead of us is reconciliation so that we can definitely say farewell to arms," explains SPLA leader Dr John Garang. "By signing we will be able to set out a new horizon for our country." Everyone in Sudan has been touched by the conflict. Michael became a child soldier when he was ten. Now he hopes he will be able to go to school. Nineteen year old Sulwa is desperate to return home. But like many, she's lost trust in her government. "While peace is finalised in the South, another war is breaking out in Darfur," she laments. However, most experts believe that, while the agreement is far from perfect, it is the best opportunity for peace in years.
FULL SYNOPSIS
TRANSCRIPT