Rebels After the Flood 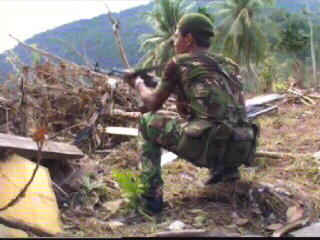 GAM rebels vow the imminent cease-fire won't stop them working for an independent Aceh. But how has the Tsunami affected their chance of success?

Exclusively, journalist Martin Adler has entered rebel territory and is the first reporter to hear their side of the story. From their vantage point in the mountain, insurgents watched the wave flatten local villages. Although none of GAM's fighters were killed, their source of supplies has been wiped out and families killed. But the Tsunami has also brought their struggle for independence to the world's attention. They know it could be a turning point in the war and will use any proposed cease-fire to regroup. "It may be peace or it may be war but we will still mobilise our forces," states Commander Muharram, GAM's top leader in North Aceh. Powerful frontline journalism!
FULL SYNOPSIS
TRANSCRIPT