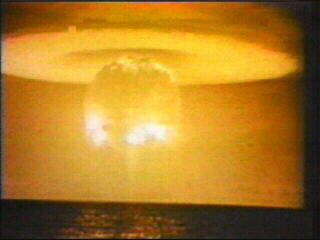 Locals who worked on France's nuclear tests in the Pacific claim they've been poisoned by radiation. It's an allegation souring Paris' relationship with its colony.

"What the French government did to my people is hard to forgive," states resident Roland Oldham. From the 1960s onwards, the French detonated approximately 200 nuclear bombs in the Pacific. Now, thousands of former nuclear test workers are sick. They want France to accept responsibility and pay compensation. "People are convinced that the health problems they have come from the fact that they worked at a nuclear site." But with the island dependent on France for aid, Paris was able to silence the early calls for justice. Now, their campaign has growing momentum. The election of anti-Nuclear campaigner Oscar Temaru helped catalyse French awareness of the issue. And in a parallel development in France, French veterans who worked on the nuclear projects are suing their government for compensation. They also claim they were made sick by exposure to radiation. But for now, Paris seems deaf to the clamour for justice.
FULL SYNOPSIS
TRANSCRIPT