Is a century of psychoanalysis completely wrong? Ever since Freud, eating disorders have been considered psychiatric ailments. A revolutionary theory has turned this on its head. 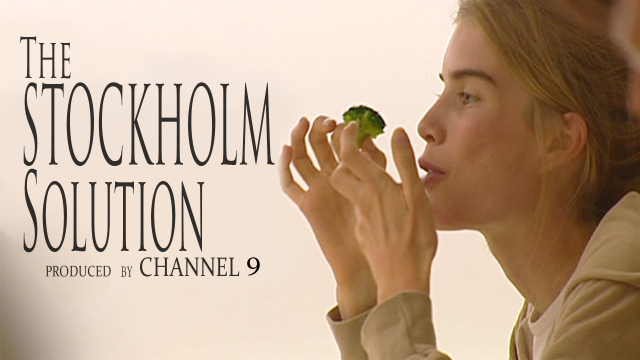 Is a century of psychoanalysis completely wrong? Ever since Freud, eating disorders have been considered psychiatric ailments. A revolutionary theory has turned this on its head. A Stockholm clinic is asserting that diseases such as anorexia nervosa and bulimia are not psychiatric illnesses at all, which means they require radically different treatment. In defiance of conventional medicine, the clinic offers what may well be the World's first ever cure. "This is on a par with the invention of penicillin."

"I could feel my heart stopping. My ears were ringing. I couldn't see. I went to bed because there was nothing else I could do. And I didn't know if I would wake up in the morning." For 5 years, 15-year-old Nayna has been battling anorexia. She has had lengthy stays in countless hospitals, usually admitted as an emergency patient. Four months ago she was the weight of a 7-year-old child but for the first time she has made headway against the disease. The Karolinska Institute is an internationally renowned medical research centre that awards the annual Nobel prizes for physiology and medicine. It is now also the home of Professor Per Soderston and Dr Cecilia Bergh's radical, new treatment of eating disorders. According to these medics, their studies show that even a simple diet can develop into an eating disorder. The combination of too little food and too much exercise means the body is propelled into starvation mode and begins to react in alarming ways. Unlike traditional diagnoses, "we say that the psychiatric symptoms - such as anxiety, depression and obsessional behaviour - are the consequences of the distorted eating rather than the cause", says Dr Bergh. As the disease takes hold, sufferers quite literally forget how to eat properly and a vicious cycle begins. Soderston and Bergh have ditched the anti-depressant drugs prescribed in conventional treatments. Instead they teach the patients how to eat all over again. "They're teaching me when to feel full, when to stop eating", explains Nayna. A specially designed computer helps each patient avoid eating too slowly or too quickly. The result is extraordinary. "It's so useful. It's my safety zone now," says Gemma, "I know it won't lie." After a rigorous seven-year scientific trial, Soderston and Bergh are claiming hitherto un-heard-of results. "75% of these patients will go into remission within about a year and about 90% of those going into remission will stay healthy". This is spectacularly at odds with psychiatric treatments, after which almost half of the patients relapse. But not everyone is convinced. Dr Bergh and Prof Soderston had hoped to see their results replicated in trials elsewhere. But their efforts have been ignored. "We have initiated discussions for years but the psychiatric community has so far said they do not want to participate". As one eminent Australian psychologist states, "it's shameful that psychiatry has rejected this notion out of hand". And yet, Karolinska is a godsend not only for the patients but also their families. "I knew mum had nothing to do with it. But when it's drilled into your head every day at the hospital you can't help but believe some of it", says Gemma whose relationship with her mum had become increasingly strained. Psychiatrists often lead families to believe that they are in some way to blame for the anorexia or bulimia. Karolinska disagrees and it's secret is simple. "Just focus on the eating not the problems in your head". "The more you ask why they became anorexic and what the family situation was at the time, the more you maintain the illness," insist the medics. Instead they adopt the philosophy that "when you eat right, the problems in your head slowly disappear," and their statistics speak for themselves. (C9)
FULL SYNOPSIS
TRANSCRIPT