Kurds Caught In The Crossfire

We focus on the innocent bystanders caught in the struggle by Kurdish freedom fighters and the Turkish army. 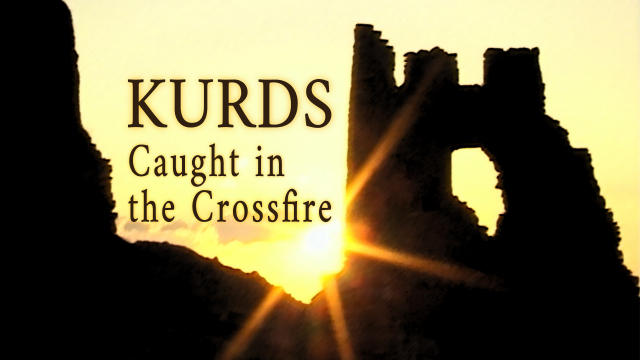 This film focuses upon the fate of innocent bystanders who find themselves in the firing line between the Turkish Army and the PKK guerrillas. Throughout this vicious war, the military has taken an uncompromising stance towards the PKK and any Kurdish villagers suspected of supporting them.

Necati Bilican, regional Governor of the South East, states, "Our security forces have legal rights to fight actively against terrorism. We have evacuated some villages but we don't burn them." The evidence does not back up his claim. Littered across South East Turkey destroyed and derelict villages bear testimony to a Turkish scorched earth policy. Pock marked walls of blackened houses and concrete rubble characterise villages all along the Turkish Iraqi border. A Kurdish woman cries out bitterly, "They burn our properties, our houses, our animals, everything," while an anonymous interviewee describes how the soldiers tortured children in the village square. Suspected of supporting the PKK, Kurdish villagers - dwelling in the simple stone houses - face an vengeful onslaught from one of NATO's biggest armies. On a sandy ridge towering above the arid desert, a company of Turks hold the front-line. Every night they fire canon at the PKK to prevent them from crossing into Turkey. Frowning against the harsh sun, a young conscript talks of the "Fatherland" and claims that his family is "proud" of his work. The Kurdish village of Tepekoy has now joined the Turks in their fight against PKK insurgents. Having once donated food and money to the PKK, the people became disillusioned with the guerrillas after they recruited young fighters from the village. The government promotes 'village guard schemes' which are specifically designed to pit Kurdish villagers against Kurdish rebels. We profile the scheme which is typical of the cruel tactics used again and again to exploit Kurdish discord. It's divide and rule at its most basic. In a peaceful orchard, Zahir, a former village guard quietly tells how he lost his entire family during a PKK revenge attack. PKK guerrillas creep into Turkey from Iraq under the cover of darkness. They travel from village to village seeking support. Their forces - composed mainly of adolescents and ardent idealists - number only 20,000. They fight an army 247,000 strong. Men and woman train together in secret hideouts and carry out the orders of their messianic leader, Abdullah Ocalan. In an interview, he says that all he wants is a dialogue with the Turkish government to end the brutality on both sides. At his office in Ankara, Akin Birdal, Chairman of the Human Rights Association, reveals that 14 of his colleagues have lost their lives attempting to gather information in the South East. Roadblocks deny journalists access to sensitive regions and those who do get through risk imprisonment and even death. Journalists at a demonstration in Cizre are shot down by the army as they walk along the road waving a white flag. We overcome extreme censorship to examine the tangled web of recriminations and the human suffering on all sides. We set the broader politics of an ugly conflict against the more human realities of the soldiers, guerrillas and civilians stranded in the South East. A film by Mark Stucke.
FULL SYNOPSIS
TRANSCRIPT