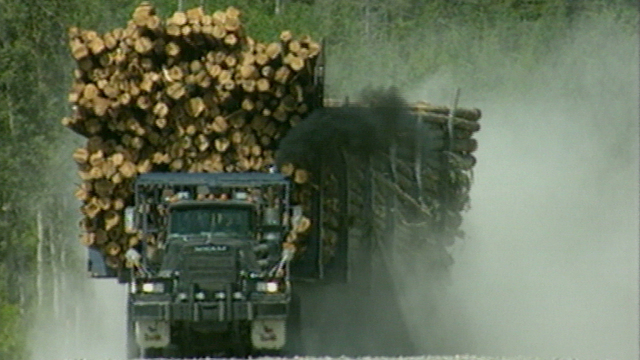 The Cree people of Quebec have fought hard to gain rights over their land. The mooted separation of Quebec from Canada could put this all at risk.

If Quebec leaves Canada, Grand Chief Matthew Coon Come warns that Cree Indians will go with the English. Separatists pay heed since an independent Quebec could not survive without the rich resources of Cree lands. A gleaming chain of lakes linked by pine forest have been used as hunting grounds by Cree families for generations. If Canada splits, the Cree believe it will be the greatest threat since the arrival of the Europeans. As a young man, Matthew defied a multi billion project to dam the north west rivers, learning the white man's ways by becoming a lawyer, leading Indian leaders in heated protests to stop the expansion of existing reservoirs. His belief that separatists will revive those plans is confirmed by an interview with the Quebec Ministry of Resources. Even now, 150 ft virgin pines are toppled to the ground like matchsticks as the land is cleared for development. As exploitation of these lands alienate the Cree from the Quebec administration, French officials exacerbate tensions by refusing to acknowledge Cree sovereignty over the north west. The natural abundance of the province makes it a battleground on which Canada's greatest question might be resolved. Produced by ABC Australia
FULL SYNOPSIS
TRANSCRIPT