What's it like being a gay teenager in high school? This intimate documentary provides a rare glimpse into the lives of three gay kids. An empowering film about daring to be different. 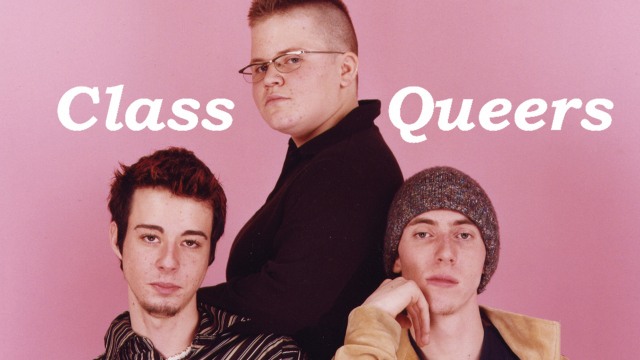 What's it like being a gay teenager in high school? This week's intimate documentary provides a rare glimpse into the lives of three gay kids. We follow Adam, Richard and Adina as they weave their way in and out of school, braving harassment and rejection as they come to terms with their sexuality. Eventually, they find refuge in a special education programme for gays where they can continue their schooling without risk of abuse. Compelling and insightful, "Class Queers" is an empowering film about daring to be different.

"She sticks out like a sore thumb. My husband didn't want that kind of flak so he banned her from coming to synagogue," states fifteen year old Adina's mother. Like many gay teenagers, one of Adina's biggest struggles was gaining her parents' acceptance. "Her father has a very prominent role in the Jewish community and he feels that if people find out that she's a lesbian, it will have a major impact on him," explains her mother. But for Adina, her father's ban was another rejection. "He hasn't even talked to me. For two months, it was just a total cold shoulder." As well as being ignored by her dad, Adina was also ostracised at school because of her sexuality. "It got to the point where I tried to kill myself just so I wouldn't have to be there," she recalls. "Looking back on it, I didn't want to die. I just wanted to escape. I couldn't deal with all the pressure and the threats." The final straw came when a councillor accused her of encouraging other students to become lesbians. Seventeen year old Adam was also forced to leave school because of his teacher's attitude. "The three years I was there were a living hell," he claims. Instead of helping him accept himself, the guidance counsellor tried to teach him to walk like other boys. "It's humiliating that somebody would actually do that and try and change the person that I was. They thought it was a big joke." But the breaking point came after a teacher made an impromptu comment to the class, equating homosexuality with bestiality and rape. Both Adam and Adina sought refuge in the Triangle Programme, an education system ran in the basement of a church for gay children. "She's so happy there. It seems to give her a lot of meaning," states Adina's mother. Even her father accepts it's the best place for her. After attending her graduation ceremony there, his attitude towards Adina changes. He now allows her to go to synagogue again. "Even though she's the rabbi's daughter, he's willing to take the chance that the people at synagogue will accept her." While Adina and Adam both thrive at Triangle, school takes a back seat to survival for seventeen year old Richard. He lives with his homophobic mother and her boyfriend in a chaotic, filthy, one bedroom apartment. Desperate to leave home, he drops out of the programme to earn enough money to rent a flat with his boyfriend, Pierre. But when Pierre leaves him his life spirals into darkness. A stranger spikes his drink at a club and he blacks out. "I remember opening my eyes when I was in bed and this guy I didn't even know was having sex with me," he confides. He goes home and collapses in tears. "I just started bawling my eyes out. God how can I put myself in a position like this?" Four months on, Richard returns to the sanctuary he left behind at Triangle for Prom Night. He's still hoping to return to school next year. Adina has also re-enrolled in the Triangle programme. But Adam feels it's time to move on and return to mainstream school. "I'm not even scared about the gay issue anymore. I'm comfortable with that now." Thanks to Triangle, he's learnt to accept himself. Michelle Stratford
FULL SYNOPSIS