A fascinating insight into the world of the Vatican 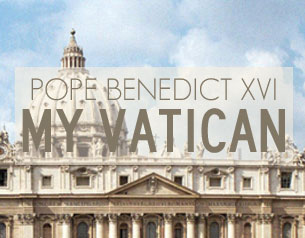 As Jean-Paul II's right hand man and most influential theological advisor, Cardinal Joseph Ratzinger became known as 'God's Rottweiler'. Now, the world knows him as Pope Benedict XVI. In this intimate documentary, he provides a first hand glimpse into life at the Vatican. It's a world that no ones knows better than him. Where the Pope is absolute ruler and the official language is still Latin. From the archives of the Inquisition to the catacombs and museums, he guides us around numerous locations inaccessible to the public. Many have never been filmed before. A fascinating insight into the world of the Pope.

If the Vatican were a firm, it would be the oldest business in the world with more than a million colleagues and branches in every village. It's the world's wealthiest organisation and at the centre of countless conspiracy theories. But Cardinal Joseph Ratzinger, the Pope to be gently rebuffs all the rumours. "It's not true that we spend all our time rummaging around secret archives," he laughs. "The Vatican administration is not substantially different to, or substantially more mysterious than, any other large political administration". But what other half km square patch of land has its own private army? It's own postal system, currency, telephone exchange and train system? It's the only country in the world whose gates are opened and locked each day. Official residents like Ratzinger travel on a Papal passport which is written, naturally, in Latin. "It's difficult for guards to understand because it's written in Latin," he states. "The most important thing they see is 'Vaticanum.'" Although around 4,000 people work for the Vatican, only 500 are official residents. The others are foreign employees and work six days a week for below the minimum wage. Labour unions and contractual negotiations are unheard of and many workers are forced to take a second job in Rome. But if the salary is low, there are other advantages of working for the Vatican. Who else has the Pope as their boss? And, as Cardinal Ratzinger explains, "There are generally no taxes." As a senior Church official, Ratzinger lives rent free in a Vatican palace. "I live with seven Cardinals and two Archbishops," he states. "Thankfully, there are no neighbourhood disputes!" The magnificence of the Vatican palace is a world away from the simple room he lived in when he was first summoned to Rome. "I had only a room and a few books and lived out of a suitcase," he states. "But in those early days, even with the simplicity, I was filled with excitement. I think back fondly." But those days are now long behind him. Since his appointment as prefect of the Congregation, Cardinal Ratzinger has been a leading figure in the Church. His religious conservatism and doctrinal conformity have provoked criticism and controversy. But ironically, he first came to prominence under John XXIII as a moderniser. As governor of the former Inquisition, he made its secret records available to researchers. "We can say today that the justice practised by the Inquisition was not worse but rather better than the worldly justice of the same time," he states, showing us around the Inquisition's archives. To most people the Vatican is a shadowy world of closed doors and dark secrets. This intimate tour, from the new pope himself, opens the door into that world.
FULL SYNOPSIS
TRANSCRIPT