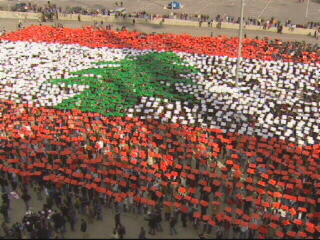 If the murder of Rafik Hariri was meant to strengthen Syria's position in Lebanon, it backfired spectacularly. For the first time, people are speaking out about the brutality of Syrian occupation.

"The Syrians deal like the old fashioned Soviet regimes," complains aspiring politician Gebran Tueni. "They rule the country imposing a reign of terror." During the Lebanese civil war, Martyrs' Square separated the Muslim west from the Christian east. But, for the meantime, both sides have united to rally against what they consider a sinister force in Lebanese affairs. "We all want the truth. We want independence. No secret service, no Syrian soldiers, no oppressive government," states Tueni. Lena Ghorayeb was only a small child when Syrian forces arrived in Lebanon. "They went into the house and killed all my family," she laments. Later, she was arrested, tortured and sexually assaulted for handing out anti-Syrian leaflets. But in Lebanon's south, where Hezbollah is the dominant force, people are quick to thank the Syrians for helping to restore stability. However, even Hizbollah acknowledges that it is now time for the Syrians to withdraw. "We are very keen on sovereignty," states spokesman Ghalib Abu Zainab. The challenge over the next few months will be to maintain this new spirit of unity and move on to a new era of nation building.
FULL SYNOPSIS
TRANSCRIPT