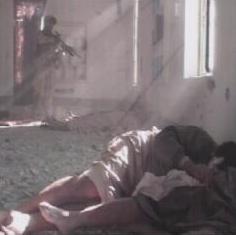 The horrific shooting of an unarmed wounded Iraqi in a mosque shocked the world. But what really happened that day was never publicised. This exclusive report reveals the true story.

"I knew I had filmed something that has been captured on camera very few times in war," states NBC reporter Kevin Sites. His footage of a marine shooting a wounded combatant was so shocking that most American audiences didn't even get to see it. NBC released only a single black and white still. But even worse than the shooting, Sites alleges that four other wounded men were also killed in cold blood that day at the mosque. "These men were definitely shot again, freshly shot, after having been wounded the day before." The killing of the other insurgents was largely ignored by the media at the time. With the war such a hot political issue in America, the press is reluctant to criticise the actions of its own soldiers. In the original NBC report, Sites went to great lengths to justify the marine's actions. But while the soldier involved was cleared of any wrong doing, Sites himself came under attack for releasing the footage. "I received thousands of hate mails and death threats saying I was a traitor." The real issue of acceptable rules of combat seems to have been lost in the rush to discredit Sites.
FULL SYNOPSIS
TRANSCRIPT