Nation-building is the 21st century's buzzword. But it is less often we hear about democratic systems being dismantled. What is really happening in Nepal? 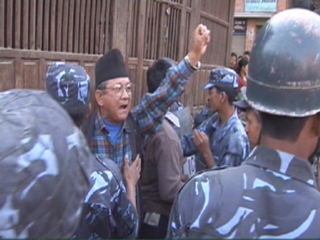 Nation-building is the 21st century's buzzword. But it is less often we hear about democratic systems being dismantled. In February, King Gyanendra of Nepal seized back his country's fledgling democracy, reverting to an autocracy. He claimed democratic parties had done nothing to prevent the crippling Maoist insurgency and promised a renewed 'War on Terror'. But since his take-over, it is less the Maoists that have faced a crackdown, than the democratic parties themselves. In an exclusive investigation from the besieged nation, we examine what the future holds for Nepal.

A crowd of youthful Nepalis march through Kathmandu chanting and beating their fists. 'Democracy! We want democracy! We want democracy!' Keen to avoid the police, small groups of protestors appear dotted across the square. It gives them a few all-important seconds to chant their pro-democracy slogans, but they are all ultimately bundled into police cars. Since February 1st, a state of emergency has been declared in the remote mountain kingdom, banning all democratic parties, freedom of assembly or freedom of speech. Anyone associated with the former democratic government has faced arbitrary arrest. 'It's not possible for us to stay in our homes' laments Nepali Congress Party member Gagan Thapa. 'My house has been raided more than five times'. In a 30 minute speech on the day of the coup, the King claimed 'Nepal's bitter experiences over the past few years show democracy and progress contradict each other'. He accused the democratic parties of corruption, nepotism, and, most importantly, singularly failing to control the maoist insurgency. So far, the maoist uprising in Nepal has cost over 10,000 lives. There is scarcely a district in Nepal that has remained unaffected. 'There are only two choices for His Majesty the King' states foreign minister Ramesh Nath Pandey. 'One was to allow this country to become a failed state. Another was to save it'. He argues the state of emergency is, in fact, the key to protecting Nepal's democratic future. As a result Kathmandu is littered with detention centres. The Foreign Minister insists that there are no more than 50 political prisoners in Nepal. But secret filming by the crew shows evidence of at least 120 prisoners in just two centres. Human rights groups claim there are over 1000. In such a climate, it is only the bravest and most determined democrats who dare to speak out in favour of the people. Gagan Thapa is a key student leader, who makes quick and well planned speeches across Kathmandu. He is forced to travel in disguise, and for a quick getaway keeps a motorbike handy whenever he appears in public. Today Gagan is at a press conference for the Congress Party. But he spots plain clothes policemen everywhere and is forced to leave early. The next day, he receives the news his second in command has been arrested. The King refuses to talk to the Maoists, so a peaceful solution looks unlikely. But while the great and the good of Nepal's democratic scene sit locked up, the insurgency continues unabated. No-one seems to know what the future holds. 'People are doubtful about the King's true motives' suggests one journalist. 'The longer this drags on, the more they'll be convinced it is indeed a power grab'.
FULL SYNOPSIS
TRANSCRIPT

Bronwyn Adcock came to Dateline in 2001 after spending a year living overseas, including time studying Farsi in Iran. Before that Bronwyn was with the ABC for 5 years, working with the AM, PM and The World Today Programs. She also had stints at ABC TVs Four Corners, the Canberra Press Gallery and Radio Nationals Background Briefing program. In 1997 Bronwyn received the inaugural Andrew Olle Scholarship, and while at the ABC she was twice a finalist in the Walkley Awards.
Since coming to Dateline Bronwyn has reported from the Balkans, Africa, the Pacific, the United States and Europe.
In 2003 Bronwyn was the first journalist ever to gain access to one of the "Pacific Solution" detention centres for asylum seekers on the Pacific island of Nauru. For this exclusive story from inside the camp Bronwyn received a United Nations Media Peace Award, and was also a finalist in the Walkley Awards and the Logie Awards. In 2003 Bronwyn also received a United Nations Media Peace Award for her story on the Zambian governments refusal to accept GM food aid. At the same awards she received a special comendation for her reporting from the Congo.
Most recently Bronwyn undertook an extensive trip through 5 countries to report on the arrest and detention of Mamdouh Habib, an Australian man held in Guantanamo Bay Cuba. This story, which revealed new claims that Mr Habib was tortured, continues to be discussed in both the domestic and international politcial arena today.