In 1945 Hiroshima was a thriving part of Japan's war industry. Trams ferried many thousands of troops to and fro. Operating the trams was a team of young bubbly tram girls. This is their story. 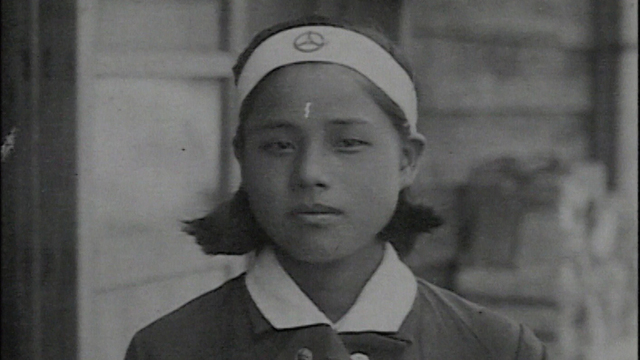 On 6th August the world will remember the day the atomic bomb was first used, 60 years ago. In 1945 Hiroshima was a thriving part of Japan's war industry. Trams ferried many thousands of troops to and fro. Operating the trams was a team of young bubbly tram girls, who loved their work and who had all their lives to look forward to. But then the bomb was dropped on their city and time stopped for the tram girls. Powerful and unique archive takes us back to that terrible day.

On the 6th of August each year, the girls who drove Hiroshima's trams meet for a reunion at the Hiroshima Electric Railway Company. Some were as young as 14 or 15. The city was a crucial staging post for the Japanese military and the young schoolgirls eagerly took up the cause for victory. The work was fun, as boys hung off the trams and flirted with the young girls proudly driving up-front. The pain of what followed was so intense it took many years for some to remember. ...The flash, the bright blue light, and then the darkness. It came without warning from the Aioi bridge, in the heart of the city. The world's first atomic bomb seared into the Japanese psyche. When the dust cleared the city was a desert, and radiation sickness had befallen those who had not been immolated by the blast. "Crowds of people had been walking beside the tramlines" says Akira Ishida, "There was not a trace left of them. All the walkers had been carbonised. Their shapes were contorted...not at all like humans". And so began the nightmare of nuclear devastation, the orphaned children, rotting wounds and friends dying in agony. "People with terrible burns begged me for water. They were all naked. I didn't give them any water because I was told it would kill them" remembers Aiko Suemori. Today Japan acknowledges this feeling of collective guilt of those who never gave water to the dying, with the ritual of "water giving" at the peace memorial ceremony. From the ashes of the city the people worked to get the trams, which stood like twisted skeletons amid the rubble, running again. Akira Ishida remembers "The tram ran through a city that was like a desert. At first it just went a short distance between Koi and Nishi-tenma-cho. The driver was just a schoolgirl. I saw the strength of those girls. Watching them was like seeing the strength of the city returning". Writer Ken Kimura says "The nature of the railway is to connect people. On the first day there was only one kilometre of track, but it was the symbol of hope for the people of Hiroshima and so was the sound of the tram bell". But for these brave young women the bomb had extinguished every ray of hope. The school where they had trained as drivers was destroyed in the blast, closed forever. Haruno Horimoto says "I had gone through hell, but I had not cried once. When the school closed down, though, something broke inside me, tears suddenly streamed out of me like a waterfall. I have been crying ever since. Nothing makes me happy". And yet she speaks with a smile, the smile of a Japanese lady of great dignity and of a certain age, whose life might have been so different, had her youth not been coloured grey by the Atomic bomb. Six days after the bomb fell, Japan surrendered, putting an end to the second world war. But for the tram girls of Hiroshima the destructive force of man's latest weapon signalled just the start of life long suffering.
FULL SYNOPSIS
TRANSCRIPT