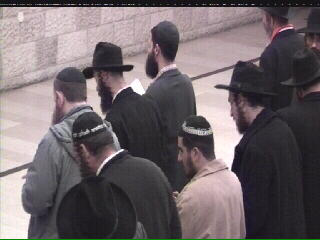 Settlers in Gaza are turning on those who accept government compensation and volunteer to move. They're determined to sabotage Sharon's disengagement plan.

"If sick soldiers use weapons to uproot civilians, we are going to receive them with weapons," vows Rabbi Yasef Dayan. He claims that if Sharon goes ahead with the Gaza withdrawal, he will be assassinated like Yitzhak Rabin. In the settlement of Gush Katif, the mood is virulently anti-Sharon. Only one resident, Meir Rottenstein, openly supports the planned withdrawal. "As far as we're concerned, that man is an outcast," states his neighbour. Rottenstein's shop has been vandalised and his business boycotted. The Israeli peace group, Shuvi, claims other residents want to leave but are too afraid to speak out. "They're afraid of losing their jobs, that neighbours will stop speaking to them and their children will be beaten up at school." (SBS)
FULL SYNOPSIS
TRANSCRIPT