Does Garuda Airlines, Indonesia's National carrier, carry out political assassinations for the government? Following the bizarre poisoning of the country's leading human rights activist, Munir Said Thalib, on one of its flights, it's increasingly likely. 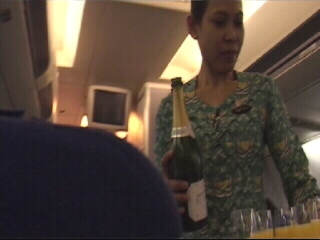 Does Garuda Airlines, Indonesia's National carrier, carry out political assassinations for the government? Following the bizarre poisoning of the country's leading human rights activist, Munir Said Thalib, on one of its flights, it's appearing more and more likely. Since then, his colleagues have uncovered a series of shady connections between Indonesian intelligence and the National airline. They're also investigating the deaths of other government critics, who all died mysteriously after flying Garuda.

Munir Said Thalib was Indonesia's bravest and hardest working human rights campaigner. He repeatedly spoke out against Indonesia's generals, accusing them of "killing people and hiding behind those in power." His murder last September threw Indonesia's human rights movement into chaos. As colleague Smita Notosusanto laments: "The campaign is completely in disarray now." Munir died after boarding a Garuda flight to Holland. At the check in, he bumped into an old acquaintance, Garuda pilot Pollycarpus, who offered to upgrade him to business class. A few hours later, he was dead - poisoned by the airline food. "I was shocked they'd done that to my husband," grieves his widow. Suspicion for Munir's murder immediately fell on the Indonesian intelligence, BIN, which had many reasons for wanting him dead. "There is no other institution who could place someone in a company like Garuda except an intelligence body," explains colleague Rachlan Nasidik. But it also quickly became apparent that Garuda airlines helped organise, or at the very least covered up, the political assassination. Munir's widow remembered that the pilot, Pollycarpus, had phoned a few days earlier to confirm details of Munir's flight. Her husband had already voiced suspicions about him, saying "That guy's weird. He acts like he's a mate." For a civilian pilot, he spent an awful lot of time in Indonesian hotspots like West Papua, East Timor and Aceh and could provide no valid reason why he was on that flight. Then they traced the last calls on Munir's mobile to Pollycarpus. "He was making sure Munir left." In an attempt to deflect attention, Pollycarpus released three letters from Garuda senior management justifying his presence on Munir's flight. But they only created more questions. One was signed by the company's executive director, Indra Setiawan, and bypassed three levels of management appointing him aviation security officer on that specific flight. "For an executive director to write to a pilot as if this pilot is directly under his supervision is very strange," comments Rachland Nasidik. As Munir's colleagues delved deeper, they uncovered a link between Pollycarpus and the national intelligence agency, BIN. Indra Setiawan, executive director of Garuda, even admitted there was nothing he could do to stop BIN using his airline. "The government is the chief shareholder. If they need to place a person there, then we are only management." Munir's death has led to suspicion that other high profile campaigners were also poisoned on Garuda flights. Mohammed Yamin and Baharrudin Lopa both died shortly after boarding a Garuda flight. Both were investigating corruption at the highest level. President Susilo Bambang Yudhoyono has promised that Munir's killers will be found and brought to justice. But if that happens, it will be a first. In Indonesia, no case of this kind has ever been solved.
FULL SYNOPSIS
TRANSCRIPT

David O'Shea has been with Dateline since May 1998. Based in Jakarta, he has reported widely on developments in Indonesia following the fall of President Suharto. He travelled frequently to East Timor in the months leading up to the independence referendum. O'Shea filmed profiles of former President Abdurrahman Wahid, East Timorese militia leader Eurico Guterres, and Taufiq Kiemas, the husband of Indonesian President Megawati Sukarnoputri. He has filed reports from Cuba, Laos, Cambodia, Thailand and Fiji. O'Shea previously worked as a producer for ABC Radio National, and a researcher on the SBS Insight current affairs program. He speaks fluent Indonesian and Spanish, and has a working knowledge of Portuguese.