Why has the prospect of Turkish membership enflamed such passions? This is an intelligent and thought provoking documentary on modern day Turkey. 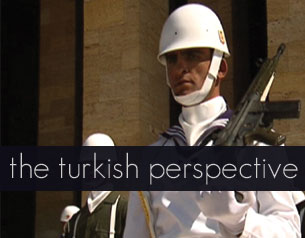 Following the French and Dutch referendums, what now for the EU? Why has the prospect of Turkish membership enflamed such passions? Our offering this week is an intelligent and thought provoking documentary on modern day Turkey. From the legacy of Ataturk to the threat of Islamic fundamentalism, it provides a snapshot of a nation in transit. Made for ARTE.

In the bustling town square, teenagers lounge around in jeans and revealing T-shirts. Cruise ships glide along the sparkling Bosphorus, their passengers soaking up the sun. Come to Istanbul and you could be anywhere in Europe. But teenagers in Turkey are annoyed by their country's reputation elsewhere. "The Europeans are full of prejudices," complains cartoonist Melik Sah, chewing a stick of gum. With his pierced ears and designer T-shirt, he doesn't look like your impression of a typical Turk. Since the time of the crusades, Europe has regarded Turkey with wary suspicion. "We are seen as the other, the stranger. That's a deep part of the European collective conscience," complains journalist Tuncay Akgun. But as Jean-François Perouse from the Institute for Anatolian Studies explains: "The Turkish Threat influenced the shaping of Europe. The common identity of a Christian Europe rose in importance because of the threat of another civilisation." This image of a 'dangerous Turk' continues to shape perceptions of modern Turkey. Many question if a staunchly Muslim country can be absorbed into the EU without a dilution of Europe's shared communal values. Even within the EU, many oppose its membership. As MEP Hans-Gert Pottering states: "The most important factor in the EU is the shared culture, not only the shared religion. The historical age of enlightenment didn't occur in Turkey. It doesn't have a clear view of its own history." But Armenian representative Luiz Bakar disagrees. "For Turkey to be excluded because of cultural reasons is discrimination." MEP Daniel Cohn-Bendit argues that Turkey's EU membership would combat terrorism by proving: "the clash of cultures between the Muslim world and Western societies can be overcome." Turkey has already implemented a number of reforms to meet EU requirements. In a brightly decorated house, young mothers play with their new babies. But this is no ordinary nursery - it's a government run shelter for women escaping abuse. Laws excusing honour killings have been overturned, prisons modernised and the Kurds granted more rights. "Because of the EU there are many changes in Turkey," comments Turkish youth Mehmet Ozkan. "These are good developments." But even before these changes, Istanbul was a bustling modern metropolis with a sophisticated, liberal middle class. Women in the cities share more in common with women in the West than with their compatriots in the slums. They often live with their boyfriends, have university degrees and easy access to divorce. As early as the 1930s, Mustafa Kemel Ataturk, the founder of modern Turkey, ordered that women should stop wearing the veil and help build up the country. Ataturk's legacy of modernisation continues to shape Turkey. He saw the future of his country as lying within Europe. Today, the army is charged with protecting his plans. "When the separation of politics and religion is endangered, the military has to act. That doesn't endanger but preserves our democracy," explains General Major D Armagon Kuloglu. But EU membership will force the generals to relinquish their tight grip on the country. And who knows that the results of that might be? Thomas Büsch/Sabine Küper
FULL SYNOPSIS
TRANSCRIPT

'The Turkish Perspective' was produced by Thomas Busch and Sabine Küper. They specialise in producing programs on South-East Europe and its neighboring countries. Recent projects include "Radical Islam in Turkey" and "Turkey - Politics and Army" for ORF; "Cyprus - Hopes and Tears" for N-TV Germany and "A Dream of Freedom: The Kurds in Iraq" for SWR.