Code of the Camorra

A shocking and powerful expose of the recent resurgence of the Italian mafia. 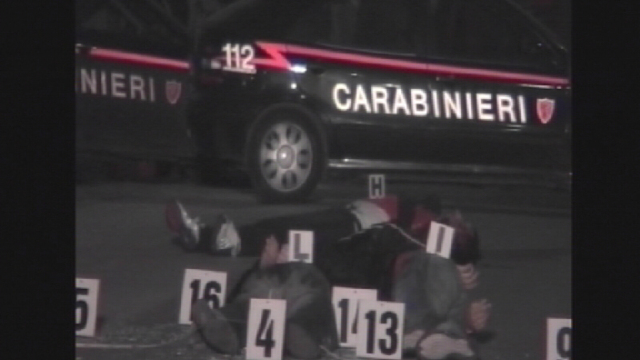 For centuries, the Mafia has been deeply ingrained in Italian society, accepted as part of 'the Italian way'. But never before have they acted with such brutality or killed with such impunity as they do now. This week's documentary is a shocking and powerful expose of their recent resurgence. We hear from gang members, their victims and the police chiefs struggling to contain them and investigate how far the Mafia's influence reaches. Do they really have links to the Berlusconi government?

At a secret location in Southern Italy, a member of the Mafia is giving us a rare insight into mob life. "At 12, I was robbing couples. At 15, I shot a man in the legs. Right now I sell drugs," he confides. Members like 'Giovanni' have turned Naples into a battleground on a scale that's never been seen before. In the past year alone, over 600 people have been murdered in Naples. And the Mafia's power is only growing. "In Italy, organised crime has never had such a freehand as it has today," laments Italy's most renowned criminologist Amato Lamberti. "There's a link between industry, state and organised crime." He believes the growing power of the Mafia, or Camorra, is directly connected to the policies of Silvio Berlusconi. "The Berlusconi government has weakened the judiciary ... It gives people the message that today you can get around the law, you don't need to obey it." Lamberti also alleges that Berlsuconi's party, Forza Italia, made a direct deal with the Camorra to help them win the 2001 election. "The resounding success of Forza Italia in Sicily is directly connected to the fact that it made an alliance with the Mafia," he claims. "With the help of those who control the territory and can bring people to vote, they obtained that result." But in Naples, the foot soldiers of the Camorra have nothing but contempt for the government. "The State gives us fuck all," complains 'Giovanni'. "Berlusconi has never helped us, the government is not helping us so kids kill people to earn 400 or 500 euros." He regards the Camorra as the real authority. "It gives us jobs, feeds us, looks after us. The Camorra are my mother and father. I owe them everything." The Mafia first emerged in the Eighteenth century to fill the power vacuum created by an impotent king. Originally, they took over the authorities of the state and were a force for stability. "The Mafia didn't kill people. It doled out punishment," explains organised crime expert Maurizio Cerino. But today's clan members are far more dangerous. "Never, ever were such a huge number of people killed, particularly with such contempt and such violence against the corpse. The old rules have disappeared." But some people are speaking out against the ruthless climate of fear created by the Camorra. Raffaele Durante's daughter, Annalisa, was killed in cold blood when she was used as a human shield by a member of the Camorra. Her death ignited an unprecedented outpouring of public grief but her killer has never been arrested. Even worse, her killer's family continue to threaten Durante for taking a public stand against the Camorra. "They say that I'm a symbol. I'd rather not be a symbol and have my daughter back," Raffaele states. "I'm ashamed of being a Neapolitan the way things are going now." At the frontline in the war against the mob is police chief Claudio Domizzi. "Last Friday they started shooting at our police car with an Uzi submachine gun and a sawn off shotgun." While the police are regarded as foreign invaders in some areas, the Camorra are protected by those who live under its shadows. For men like Domizzi, the task they face is immense. In the words of 'Giovanni': "The Camorra can never die. It keeps growing."
FULL SYNOPSIS
TRANSCRIPT

Nick Lazaredes has enjoyed a media career spanning 20 years. Hailing from the northern NSW town of Kyogle - Nick joined ABC Radio in 1985 as a cadet journalist - later moving to ABC-TV news in Canberra - followed by several years reporting for "Countrywide" and "Landline" on ABC-TV. In 1992 he won Australia's national Dalgety award for Rural TV journalism. In that same year, driven by a desire to chart the stories emerging from the chaos of the recently collapsed Soviet Union, Lazaredes moved to Moscow, where he established a Television Production company. For 2 years he travelled extensively in Russia, Latvia, Kyrgyzstan, Uzbekistan and Afghanistan reporting for TV Current Affairs programs in Britain, Germany, France and the Netherlands. By 1994, Lazaredes' company had expaned into distribution and advertising - distributing television programs from Australia, Britain and the United States into Russia's booming TV market, and establishing a syndicated TV network based on a barter system. He also completed major research on charting the personal stories of Russian Foreign Intelligence Agents for a documentary series. Returning to Australia in 2000, he joined SBS-TV World News in Sydney, and later moved to Canberra where he was a political correspondent in the SBS Parliament House Bureau. In 2001, Lazaredes moved to Dateline. Travelling extensively for the program, Nick has filmed and produced reports from locations as diverse as Madagascar, Moldova, Morocco, Georgia , Kyrgyzstan, as well as a number of Investigative reports from Greece, Pakistan, the UK and the United States. He has a working knowledge of Russian and a strong interest in International Strategic Affairs and Investigative Journalism.