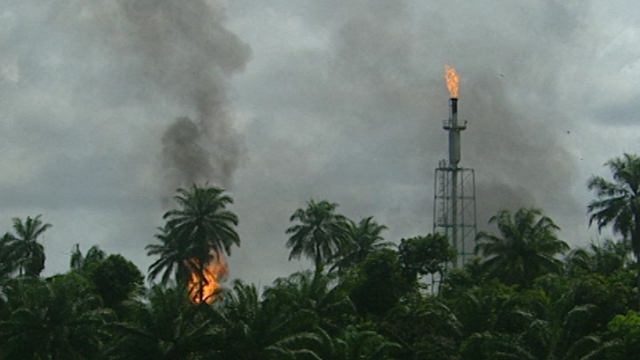 
Nigeria's lucrative oil reserves may have enriched its politicians but they've brought little but misery to ordinary people. Now, a rebel group is fighting for a share of the profits. "I need help. I need help," begs a woman, clutching her young children in despair. Her home has just been demolished to create luxury housing for foreign oil workers. "The oil boom has turned into the oil doom!" laments Pastor Lekia. Across the Niger Delta, there's growing resentment at the oil industry. "Corruption pervades the whole place, starting with the way contracts are awarded," complains lawyer Ledum Mittee. "There seems to be some sort of collusion between the oil companies and those in power." But militia leader Asari Dokubo has vowed to sever that link. He's fighting to seize control of the oil and give it back to the people. "We own the oil!" he proclaims. "The thieves are the people in Abuja." And across Nigeria, young men are flocking to his call. Last September, he spooked the international markets and forced the price of oil to $50 a barrel by threatening to attack foreign oil companies. The government was forced to agree a truce but he's threatened to rearm unless oil companies leave. Nigerians no longer expect help from their own government. It's militia leaders like Asari who are winning their trust. Rushes available ref. 3454.
FULL SYNOPSIS
TRANSCRIPT