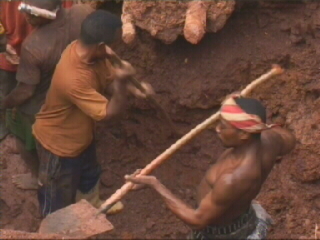 The major problem facing Africa is corruption and control of resources. In the DRC, the military is stealing minerals to sell to Western companies.

At a remote mine in central DRC, workers with torches and pick axes hack at the ruddy earth. They are mining cassiterite, a mineral vital in the production of laptops and mobile phones. But dispersed among the miners are Congolese Government troops - in plain clothes for the camera - literally forcing most workers to work at gunpoint. 'The soldiers always steal everything. They even come to shoot people down the mineshafts,' complains Regina Maponda. Western greed for cassiterite is fuelling the boom - at an airfield near the mine, soldiers jealously guard their loot as it makes it way to Japan and the West. Conflict mining is a curse, and it is difficult to see what the G8 leaders can do.
FULL SYNOPSIS
TRANSCRIPT