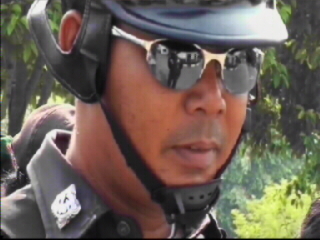 Hundreds of people have been killed in Thailand's Muslim insurgency. As distrust between Muslims and Buddhists grows, rebels are aping tactics from Iraq.

In the past 18 months, insurgents have carried out a relentless campaign of beheadings, shooting and bombings. "They are trying to create chaos," complains police chief Sommai Puttakul. Until recently, most bombings were small scale. But earlier this year, a car bomb was used for the first time, representing a major shift in tactics. "We'd never seen anything like it. This tactic is usually used overseas," states freelancer Padung Wannalac. Police are angry that rebels can easily escape to Malaysia, which has no extradition treaty with Thailand. They want to restrict movement across the border but this would only enflame tensions among Thai Muslims.
FULL SYNOPSIS
TRANSCRIPT