Russia has the fastest growing HIV infection rate in the world. An epidemic that, ten years ago, could have been relatively easily contained, is now threatening to engulf the country. 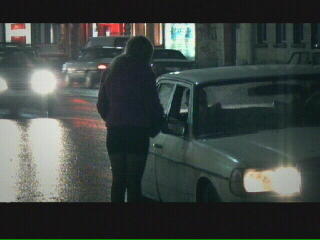 Russia has the fastest growing HIV infection rate in the world. An epidemic that, ten years ago, could have been relatively easily contained, is now threatening to engulf the country. But how has the crisis reached such alarming proportions? Sex, Needles and Roubles takes us on a journey to the cold winter nights of St. Petersburg, where we meet some of its young drug-addicted prostitutes. Through poignant real-life stories and interviews with corrupt policemen-pimps and discriminating doctors, the scale of Russia's problem slowly shifts into focus.

"Come in girls - movies! Free movies!" jokes a beautiful young women, ushering her friends into the back of a car. A sense of camaraderie fills the air as they joke with the driver and sing him love songs. "Smile Sasha, O, mi amore!" But these are no ordinary women on their way out for a night on the town. They're prostitutes, arrested in a mass round up and on their way to the police station to pay officers their daily bribes. "If we don't give them their money, then we've had it!" giggles one in mock apprehension. For most Russians, the fall of Communism has come at a heavy price. Tight social controls have vanished, giving way to a pleasure seeking economy, burgeoning prostitution and corruption. Unemployment is rife and access to healthcare and social services limited. "St Petersburg saw an upsurge in prostitution around the time of Perestroika," recalls former brothel owner, Nicolai. "It became an acceptable thing to do." Oksana will never forgot her first client: "I'd got myself very drunk. It lasted an hour. I arrived home, totally hysterical and stayed in the bathroom for two hours." Her boyfriend had just been murdered and she had no other way of making money. "I still get hysterical like that from time to time. Drugs help me calm down." Like many of Russia's prostitutes, Oksana is addicted to heroin and shares needles with other addicts. Ostracised and stigmatised by society, her main refuge comes from harm reduction programmes, like the one run by Alexander Tsekhanovitch, which offer a needle exchange programme. "Free syringes are the hook with which we catch drug addicts to start engaging with them," Tsekhanovitch explains. "We encouraging them to begin thinking about their lives." But many politicians, like Moscow's Mayor, Yuri Lushov, oppose these programmes. Lushov believes they lure young people into a life of addiction and has banned them from Moscow. Other specialists implicitly welcome the HIV epidemic as a biological solution to a social problem. "Why should we give them cotton wool to absorb their drugs?" questions Dr Aleksey Mazus, Head of the Moscow Anti-AIDS centre. "What is the point in harm reduction programmes when all they do is exchange syringes?" Many suspect a more sinister motive behind opposition to helping addicts. Currently, Russia's annual health budget only covers the cost for treatment for 500 AIDS patients. In 2007, there will be an estimated 7 million. "The distinction between those who should be treated and those who can be treated will create very serious problems," warns government critic Vadim Pokrovski. Already drug addicts are denied antiretroviral therapy. "If we allocate funds for treating people with HIV, we have to be very sure the treatment will do them good," reasons Aleksey Mazus. However, this short-sightedness is endangering the entire population. As long as influential politicians are reluctant to work with NGOs, needle exchange programmes closed down and little money spent on education, HIV will continue to spread unrestrained among the Russian population.
FULL SYNOPSIS
TRANSCRIPT

Chloë Mercier began her career as a filmmaker in Montreal, Canada, where she grew up. After winning the Special Prize of the Jury and the Publics Prize with her graduation film Blue or the Unexpected Silence of the Storm as well as the Best Short Fiction Award at the 92 Montreals World Films Festival and two other awards at the Huy Festival in Belgium, she got selected to be part of the Race Around the World, a series broadcast on Canadian National Television in which eight young filmmakers are sent around the world by themselves, for a period of six months. Whilst abroad, she directed 19 short documentaries and as a result won two awards, one being the Best Documentary Award, offered by Telefilm Canada.