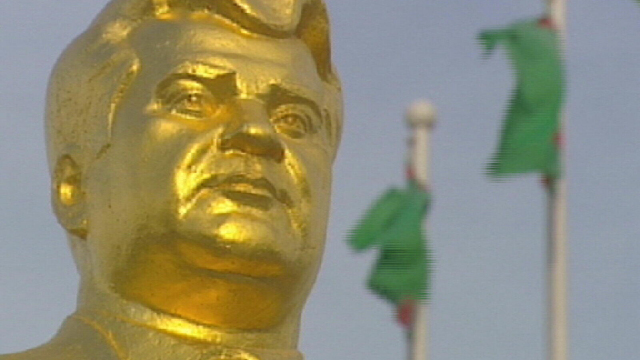 President Saparmurat Niyazov of Turkmenistan was the dictator famous in the West for his crazy decrees and bizarre personality cult. But for his people, there was nothing comical about his rule.

In Ashgabat, capital of Turkemenistan, the sun always shine on Turkmenbashi. Literally. His statues rotate to face the sun. His image is everywhere - from the vodka bottles to the national airline. He's even renamed the days of the week after his dead mother. "He's clearly a paranoid leader with very strange sorts of behavioural patterns," states political analyst David Lewis. "He is brutal and violent." Former foreign minister Avdy Kuliev agrees. "He's imprisoned many prominent people - all of them subjected to tortures, horrendous tortures." Turkmenistan has one of the lowest life expectancy rates in region. Most of the people live in crushing poverty but an atmosphere of fear and intimidation prevents anyone speaking out.
FULL SYNOPSIS
TRANSCRIPT