As Long as the Wind Carries Us

A poetic look at life in Mongolia through the eyes of its nomadic herdsmen. 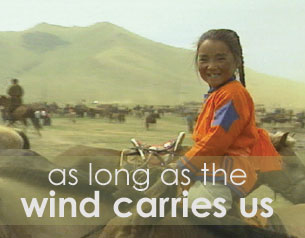 The nomads of Mongolia have become a symbol of their country's resilience. Glorified in poems and folk songs, romanticised by the West, the nomadic life has many admirers. But the reality of life in the saddle is very different. This week's offering is a picturesque and beautifully filmed journey through the rugged steppes of Mongolia. Fifteen years on from the fall of Communism, how is the country making the transition to a Capitalist society? A wistful look at a society on the cusp of change.

On July 11 every year, thousands of young nomad children gather for a 30 km horse race to celebrate their country's independence. Like a third of the country's population, these children have grown up in the saddle. They can ride almost before they can walk. But as romantic as the nomadic life seems, everyday life is hard. Mongolia is one of the poorest countries in the world and the nomads are among the most impoverished. In winter, temperatures drop to - 50°c. There's no sanitation and water has to be collected from the river. Tsetsgee has been a nomad all her life but she doesn't know how long she can continue. "We lost a lot of animals over the last few years. This winter is again supposed to be harsh," she confides. "I want to move into town but I'm not sure how we will survive." Mohnkhor left the countryside for Ulan Bator three years ago. "We don't have any money and we don't get anything from the government either," he despairs. As more and more nomads flock to the cities, the gulf between rich and poor is growing. "The nomad settlements in the city keep getting bigger," states Shaafai Naran, welfare director for Ulan Bator. "They don't have any drinking water, the sanitary conditions are catastrophic." The authorities would like to prevent nomads moving to the cities but they know many can't now survive in the countryside. However, one lifeline for nomads comes in the form of tourists who pay to live with them. "When you live with the nomads, you get to know their life," raves German student Juliane. But many nomads aren't sure what to make of their paying guests. "We get used to the foreigners but we cannot really talk to them," explains one. "We are just nice to them and laugh a lot." Before the first democratic elections in 1992, Mongolia was closed to outsiders. A succession of puppet rulers implemented Russian policy and crushed any dissent. Over 100,000 were killed in waves of political repression. Now, the Communists may be gone but the safety net they provided has also vanished. Few industries survived the transition from planned to market economy. "Privatisation was difficult because we didn't have any experience and because foreigners bribed officials," states the country's Vice President. Today, corruption in Mongolia is endemic. In the past four years, over a thousand officials have been exposed for taking bribes. But there are signs of change. The media is now independent, food rationing has ended and moves are being made to tackle corruption. A fresh political wind could be carrying new hope for Mongolia.
FULL SYNOPSIS
TRANSCRIPT