Caiomhe Butterly's definitive look at the human rights situation in Palestinian refugee camps. Working as a human shield she experiences the plight of the Palestinian people at first hand. 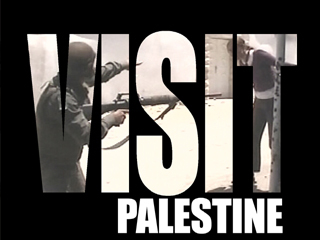 What prompts a young, well-educated Westerner to risk life and limb as a peace activist in the Middle East? With her striking red hair and bright lipstick, Caiomhe Butterly defies initial expectations of the 'typical' activist. Motivated by idealism, she blocks bullets with her body and ignores threats to her own safety to alleviate the suffering that surrounds. Her story provides a rare insight into the everyday lives of Palestinians, moving beyond usual depictions of one-dimensional heroes or victims. During a siege of Jenin, Caiomhe's luck finally runs out and she is shot and wounded. With its harrowing frontline footage and intimate character portraits, this is surely one of the most powerful films to come out of Palestine in recent years.

A young woman steps fearlessly in front of an approaching tank. Its guns slowly focus on her and soldiers let rip a volley of bullets. She refuses to move. Twenty-four year old Caiomhe Butterly is trying to stop the Israeli army encroaching any further into Jenin. After a tense stand off, the tank reverses. In the past few years, thousands of international activists like Caiomhe have travelled to the Occupied Territories to act as human shields. "We attempt to break the isolation Palestinians feel by representing in a small but potent way an alternative face of the West," she explains. But it's a dangerous undertaking. Several have now died. Others have been injured. In April 2002, the Israeli army surrounded Jenin and subjected it to a two week siege. By the time they withdrew, 60 were dead, thousands had been detained and over 400 houses destroyed. "I grappled with how to respond and decided to use my physical presence to try and minimise the brutality," Caiomhe explains. But, as she readily acknowledges: "It's an uncomfortable dynamic only made possible because of inherent racism. Our blood, as foreigners, is deemed less expendable than that of Palestinians." One of Caiomhe's main tasks is accompanying children to school. In occupied Palestine, getting an education is an act of resistance in itself. Nearly three thousand children have been wounded travelling to or from school. "We are often told that we are going to grow up an ignorant generation because the tanks are really distracting," states one little girl. In a matter of fact way, she describes how she hides under her desk when the shelling starts while teachers help students who have fainted.

As the siege progresses, Caiomhe works as a volunteer with a local ambulance. Night after night, she comforts bereaved families and rushes wounded people to hospital. "It was heartbreaking picking up the broken bodies the Israeli army left in their wake." After the April invasion, she is left scrambling in the rubble with her bare hands, trying to retrieve the bodies. As the weeks turn into months, Caiomhe finds herself in more danger. "Israeli soldiers see me on a daily basis. That gradient of protection I have as a foreigner is being eroded." Eventually she is shot in the leg and deported. On that same day, a UN consultant and 11 year old boy are killed and seven other children seriously wounded. Yet her love for Jenin remains. Awarded Time Magazine 'Hero of our Time', she travels the world publicising the plight of Palestinians. Her story becomes a conduit for their everyday lives and she soon returns to Jenin. Activists such as Butterly are usually stereotyped as lunatics, meddlers or saints. But Caiomhe herself brushes off all suggestions she's doing anything special. As she explains: "When you're surrounded by violence, it's a very human reaction to struggle for people to be allowed basic rights." Katie Barlow