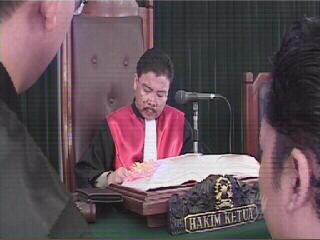 Were suspects in the Australian Embassy bombing tortured to force them to confess? We gain a rare first-hand look into how Indonesia's judicial system handles terrorism.

At 10.30 am on September 9, 2004, a powerful bomb exploded in front of the Australian Embassy in Jakarta, killing twelve and injuring a further 188. A few months later, six men were arrested and charged with the bombings. The prosecutors' case relies heavily on statements taken by police after the men were arrested. "We have not yet been given substantial facts which we believe indicate the real perpetrators have been caught," states Djolo Susilo, member on the Parliamentary Commission on Foreign Affairs. He's concerned that ringleaders, Dr Azahari and Noordin Top, evaded capture amid rumours they bribed the police. The suspects have now retracted their original confessions and claim they were extracted under torture. "They gave me electric shocks," states one. There are also concerns the police fabricated evidence and didn't follow up on key leads. With so many questions emerging about the police's handling of the case, will the truth ever be known? (SBS)
FULL SYNOPSIS
TRANSCRIPT