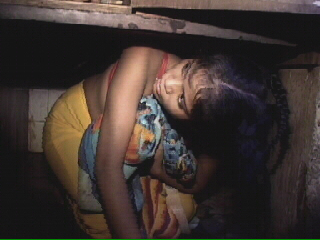 The Indian town of Siliguri is the hub of the international sex trade. Every year, tens of thousands of young girls are abducted and sold into prostitution.

A distraught mother begs for help tracing her two young daughters. "They were sent to sell milk in the market place and vanished." In all probability, the girls have been abducted and sold as sex slaves. According to the sex workers' union, there are no underage prostitutes in Calcutta and no one is exploited or abused. But children as young as 10 are regularly being abducted and forced into prostitution. On a rescue raid, police free six young girls discovered cowering in a dank hole. But for many, it's too late. A third of all rescued girls have HIV. Unless something is done to curb the child sex trade soon, more and more young girls will be condemned to an early death. (MBC)
FULL SYNOPSIS
TRANSCRIPT