Outer space is open for business. Cowboys and space bucaneers are queuing to reap the rewards. 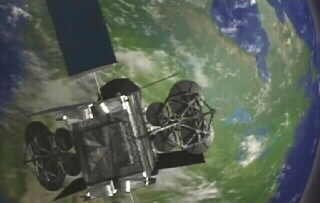 PREVIOUS BROADCASTS INCLUDE - YLE, VRY, TVC, TG4, NRK, SVT Outer space is open for business. From orbits 36,000 km away, satellites run our daily lives and put missiles in contact with their targets. But this booming $50 billion dollar a year industry is virtually unregulated. Space has become the domain of the biggest and the strongest. As it becomes increasingly commercialised and militarised, this beautifully shot report investigates whether we're allowing the dangers to outweigh the potential benefits?

Few of us give a thought to the myriad of satellites bobbing thousands of kilometres above our heads. But they are an integral part of our daily lives, governing bank transactions, what we watch on TV, the Internet and stock market. 'They really can read newspapers over people's shoulders,' states space broker Jim Benson.
It's a business that generates billions every year for space brokers like Mary-Ann Elliott. 'Over the last five years we've grown 1061 per cent,' she boasts. 'Natural resources in Space are on a first come, first served basis,' states Benson. Space buccaneers are developing plans to mine asteroids in space and celestial estate agents claim to have 2 million property owners on the Moon. According to the Outer Space Treaty, space belongs to the whole of mankind and should only be used for peaceful purposes. But in a post 9/11 world, security concerns are overriding. Space is becoming another military arena. During the Afghan war, America bought all available satellite images of Afghanistan, shutting everyone else out - including charities tracking refugees. 'We want to be sure that potential adversaries don't have the information which might help them hurt Americans,' reasons Col Patrick Rayermann. America, China and Russia are all believed to be working on powerful weaponry that can destroy enemies' satellites, devastating their national economies. 'Is a satellite a legitimate target of war?' asks Professor Karl Grossman. But this is the least of our worries: Space is being nuclearised. 'The United States has been involved for decades in sending nuclear devices up. And what goes up, can come down.' UN attempts to ban war in outer space have all failed. With laws still unwritten, the only obstacles to space exploitation are money and physics. But in an increasingly militarised world, how much need we fear our space adventure?