Havana. A haven set apart from the capitalist world, or hell on earth? 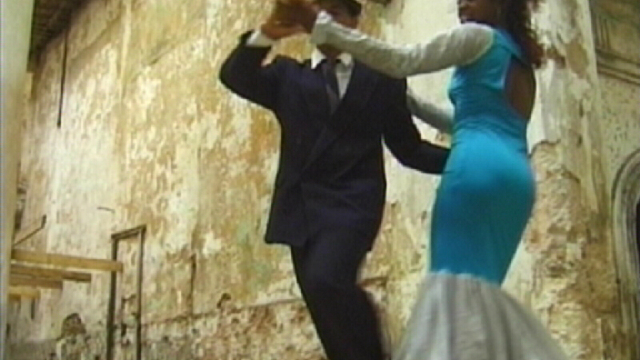 Havana. A haven set apart from the capitalist world, or hell on earth? Bye Bye Havana is A crystal clear window into a crumbling world. This is a fast-paced stream of consciousness documentary. Presenting a unique flavour of irony and carried by an eclectic and powerful soundtrack featuring Latin Grammy Nominee X Alfonso - here is a vibrant and intriguing portrayal of Cuban life.

An elderly and emaciated couple dance the salsa on the sidewalk. Slowly moving around each other, they tell us "I'm Mercedes, he's Jose. We've been married 41 years and never had a fight". A Cuban sunset. Kids playing on the streets "We're bored!" A man has a brick chained to his foot. As he drags himself along the pavement the women next to him explains "San Lazaro is a saint with leprosy". People tell the story of Cuba. Toothless faces, laughter and desperate pleas. Images tell the rest. Crumbling facades, a bustling street and faded posters. As the big bottomed girls tease the boys with nothing to do, it feels it's been this way forever. But it's changing. The girls on the billboards are even more enticing. Glamorous, and too thin. Boys look this way... Leave your Cuban girls, come to me... Its visual poetry juxtaposes modern commercialism - adverts promising us a better life through coffee, cars and cigarettes - with the difficulties that the Cubans face. Old black and white films telling anti-Communist America of the 1950s to beware and be vigilant, interspersed with shots of Havana. The American propaganda sounds hollow to our ears. The red menace is no more. 'There's a pretty good saying here in Cuba. It's better to put up with who you know as the "bad guy" because you don't know what the next "good guy" will be' says Carlos. Cuba stands pummelled by an unworkable socialism and a voracious consumer appetite. Lamparas Viejas tells it plainly "Well we're struggling, this is what you call struggle." The political movement that began more than forty six years ago seems spent. "Patriotism or death" are now not enough. Cubans want other choices. Only history can tell whether the change under Castro has been for the better or for the worse. And yet, after having been disappointed by the materialism of industrial societies, many now turn to cultural wealth to measure riches. Two generations of Cubans have been spared the American revolution of culture as commerce, which has given Cuba the freedom to develop a true identity. The McDonald super-size gospel has yet to taint Cuba´s shores. The Cubans are still dancing. Salsa and cigars reign. And, for all Havana's crumbling structures and piles of rubble, and its plethora of armed policemen and sun-bleached billboards espousing their pat, revolutionary slogans, it still manages to attract over a million pink-skinned, camera-toting, snack-munching mojito-swilling tourists each year. As the revolutionary song goes: "I don't care what they say, I'll stick around, keeping my mouth shut, struggling with problems in love with life." J Michael Seyfert
FULL SYNOPSIS
TRANSCRIPT