A poignant look at modern China through the eyes of three little girls. Member of the minority Lahu tribe, they have been sent away to the city, and boarding school to learn how to be modern Chinese citizens. 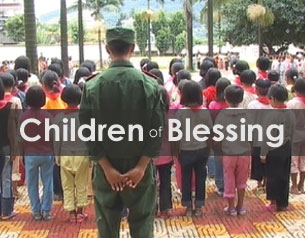 This week's character-led documentary is a poignant look at modern China. Flower, Rascal and their friends come from a remote village in the Chinese mountains and speak only Lahu. Now, they must leave their beautiful home for boarding school in the city. We follow them through their first year at primary school as they're modelled into good socialist workers. Can the Lahu girls make it in modern China? And what price will they have to pay to succeed? Similar in style to 'Être et Avoir' and beautifully filmed, 'Children of Blessing' reveals how China assimilates its minorities. Sure to be an award winner.

In a clear mountain stream, a young Lahu girl is playing. To her friends' amusement, she slips and falls in the water. For these young girls, life couldn't be more idyllic. But everything is about to change. Soon, the girls must leave their families for school in urban China. In their last lesson in the village, teacher, Miss Peng, prepares the class for the big city. The girls' eyes widen in disbelief as Miss Peng tells them: "The city kids are different. We spend 20 yuan in four months but they'll spend 200 or 300 yuan in a month." The city kids will change clothes every day while the Lahu girls will have just one set. The city will be a new and strange land. As soon as the girls arrive at Lancang Primary School, the principal quickly spells out the rules. They can no longer speak Lahu or go to church. Instead, they must work hard to become enlightened workers for socialism. Before term beginnings, the girls go to boot-camp. "Boot camp will teach us discipline and that will help us to be efficient," the principal explains. "You must follow army rules and do everything the army way." While the Chinese children take the principal's commands to heart, the Lahu girls are not used to following orders. They giggle and fidget and can't march in straight lines. The other teachers laugh at them. For the first time, Miss Peng is angry. "You were the worst class at boot-camp. You just kept fooling around. Don't you have any shame?" she chides. Lessons starts and the girls spend all their days studying. Bombarded with equations and grammar, they struggle to learn Chinese. In class, they look bored and tired. And in the key areas of obedience and discipline, they're failing miserably. According to the teachers, the girls are unteachable. Suddenly crises hit the class. Orphan becomes seriously ill. Her friends rally round her but she's in pain and no-one knows what to do. She has to be sent home. Then a thief is discovered. "Why did you steal someone else's cup? Have you been stealing since grade one?" lectures Miss Peng. Flower, the little thief, hangs her head in shame. She stole the shiny cup as a present for her mother. Miss Peng never faced so many problems in the village school. At last, there's some good news for the girls. Their mothers are coming to see them. Whilst the others proudly show off their work, Flower sits in the classroom crying. She's just learnt that her mother has eloped with another man. She may never see her again. Then the parents are summoned to see the principal. He complains that the girls are still too wild and urges their parents to make them conform. As the school year comes to an end, the girls face two big hurdles: school games and final exams. If they don't do well, they may be expelled. The principal has already said he regrets admitting them. But they're still unco-ordinated. "You march like ducks. Didn't you learn anything during bootcamp?" despairs Miss Peng. "You can't even line up straight!" The girls work hard determined to make their parents and Miss Peng proud. They sweep the boards in the games and score the highest in the Chinese exams. They should be happy but are they? They were lured into China with the promise of a better life. But over the past year, they've learnt they can only have this on Chinese terms. Brian Keeley & Jiang Xueqin
FULL SYNOPSIS
TRANSCRIPT