For centuries, Eunuchs have been an important part of Indian society. But the elevated role they once held has now faded. Today they live in isolated communities, working as prostitutes and beggars. A warm, poignant, revealing portrait. 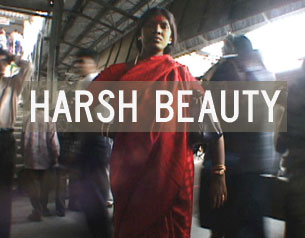 For centuries, Eunuchs have been an important part of Indian society. But the elevated role they once held has now faded. Today they live in isolated communities, working as prostitutes and beggars. Life may be hard but inside the community, there's a real sense of warmth and camaraderie. 'Harsh Beauty' follows the lives of Jyothi, Usha and Hira Bai, three Eunuchs who struggle for acceptance in a culture splintered by religion, caste and politics. Filmed over four years and accompanied by a vibrant soundtrack, it's a warm and poignant look inside this usually hidden group.

In the slums of India, a group of pretty women play together. As one brushes her hair, a friend jumps on her back and starts tickling her. Playing up to the camera, she playfully squeezes her friend's breast and they collapse in giggles on the floor. At first sight, these pretty women seem like they have no cares in the world. It's only when you look closer you notice these women are rather large. "I always knew there was something different about me. At home they were ashamed of my behaviour. They said I had to stop acting like a girl," confides Jyothi. Like the other Eunuchs in the community, she knew from an early age she had a special calling. But it was only by running away from home at 14 and joining a Eunuch community she became accepted for who she was. A year after she moved to Mumbai and began her apprenticeship under a guru, Jyothi was offered the operation. "The operation is the most important thing in our lives," she explains. "A guru performs it with no medicine. We are made to stand naked in a room while the elders talk to us. As we look upon our deity, the guru chops off our male organ." A month later, a party is held to mark their entrance into the Eunuch community. "Eunuchs come from all over to celebrate." The spiritual role Eunuch's once held in Indian society has now faded. Today, Jyothi and Usha work in a harem. "I earn my living as a prostitute. I enjoy it," Usha states. With her long dark hair, huge eyes and graceful movements she has many admirers. "I made a lot of money but I couldn't keep it. I have a guru and my guru has a guru ... The money moves through many hands." But as Jyothi and Usha open up to the camera, you catch a glimpse of their loneliness. "It's hard to watch couples laughing and having fun with each other. That's when I wonder why am I like this," states Usha. "Once we lose our beauty, men leave us and marry a woman who can have children." Cut off from the rest of society, Eunuchs have formed their own family. Traditionally, Eunuchs were revered for their spiritual powers and paid to give blessings. But as their reputation has faded, a schism has emerged in the community. Born hermaphrodites blame the behaviour of those who have had the operation for their loss of status. "They are lewd and offensive and involved in the sex trade. They've become Eunuchs to make money," states Hir Bai. "I am a Eunuch from birth. The false ones who get operated on are the other ones." But Jyothi and Usha contend that they are the true Eunuchs. "We are the ones who have gone ahead and become female. The power of a Eunuch only emerges after the operation." While they perform blessings and work as prostitutes, Hir Bai has shunned the sex trade and entered politics. "I felt that we Eunuchs could do something for our country," she explains. In the end, what unites all Eunuchs is a desire for acceptance and respect. As Usha explains: "We want to be treated with humanity. When you divide humans as male or female then where do we fit in?" VHS/DVD Sales to America not available
PREVIOUS BROADCASTS include CNN & RAI Alessandra Zeka

Alessandra Zeka is a filmmaker whose body of work reflects a diverse range of cultural explorations. Her films have explored subjects ranging from the body piercing phenomena of New York in the 90s to the running of the bulls in Spain.
Miss Zeka has traveled extensively for her work as a documentary filmmaker. In 1998-99 she traveled to Albania, where she directed To Endure (Te dürosh), a documentary that portrays the struggles of three generations of women from Albania. For Harsh Beauty Miss Zeka lived in India for a period of 18 months while researching and shooting. Born in Spain, she studied cinematography in Madrid and then moved to New York City, where she is based since 1989. Recently she has been working on other projects in Australia and China.