Delving into the shadowy back streets of the city we meet graffiti artists, watch them at work and join them in the adrenaline filled cat and mouse games they play with the police. But is what they produce art, or simple anarchy? 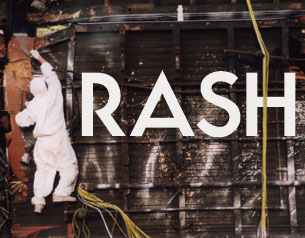 Delving into the shadowy back streets of the city we meet graffiti artists, watch them at work and join them in the adrenaline filled cat and mouse games they play with the police. But is what they produce art, or simple anarchy? The writing on the wall is abhorrent to the authorities and yet its popularity only increases. Visually spectacular, this character based film is accompanied by a vibrant soundtrack.

Three hooded youths stand by a brick wall at the dead of night. Spray can in hand, and almost finished with their work they shout to each other 'Crazy night! Time to go home!' But they have been spotted by the police. 'Here they come!' It is too late to run. Although only cautioned this time, if they are caught again the police warn them 'you will face a court appearance mate!' Graffiti, is covering the world around us like a rash. Increasingly walls, railway bunkers and side alleys are being covered in colourful images of Charlie Chaplin and Osama Bin Laden. Destroyed by cleaners during the day, at night the artists return. Every day brings new art, and new ideas. Even the MC of Jurassic-5 is joining in. Relaxing before a gig he tells us 'Ladies and gentlemen, I don't know what I am doing, but I do it in the name of painting'. But why is this happening? The youth of today angered by Iraq and the world of large corporations are using spray paint to express disillusion. 'Using the same space as the advertisers' they place their logos over billboards. Challenging the ubiquitous commercial world around them. ' Perhaps we are trying to sell an ideology but a least we are not looking to make money or profit'. The Australian Government has reacted with a 'zero tolerance' policy. For Councillor Bernard Mulholland it is a 'matter of attrition', a war that he is determined to win. 'We believe that if we continue to remove graffiti... they will give up.' This attitude and the prospect of prison has made many on the street think twice. Civil was shocked when he got caught because he realised how much 'the police really really hated me and what we stood for'. Graffiti is the child of 80's punk culture and a subversive voice. The graffiti artists are young and idealistic. For them it is an escape from 'competitive robotic jobs.' Vexta believes that 'vandalism can be a really empowering thing... not a destructive mask but a cultural layer.' The unusual, startling and poetic are brought to life on walls and doors, and the adrenaline rush helps to make it fun. Street art is now at a new level. In Melbourne it has become legendary. Attracting worldwide followers the city is being transformed into an underground showpiece. Lines between the gallery and the street are increasingly blurred. But as soon as street art is acceptable and brought above ground, how can it last? This film is a witness to a transient and fascinating moment in time.
FULL SYNOPSIS