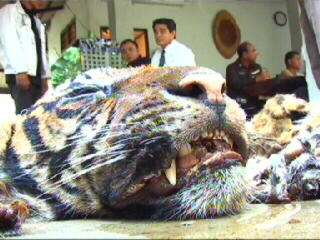 Rangers are on an urgent mission to save Cambodia's endangered wildlife. A lucractive trade in exotic animals has led to many species already disappearing.

On a misty mountaintop in Cambodia, rangers are preparing their weapons for the day's work. "If we were unarmed, everyone would just do what they want," states WildAid trainer Mark Bowman. "Recently, we've had a whole lot of rangers kidnapped by the military." The illegal wildlife trade has became a million dollar industry. "The biggest problem is the involvement of the government who help the traders establish a powerful network," complains WildAid director Suwanna Gauntlett. By targeting consumers in China, it hopes to reduce demand. "For animals, there's no more time. Most of the wildlife has already disappeared."
FULL SYNOPSIS
TRANSCRIPT