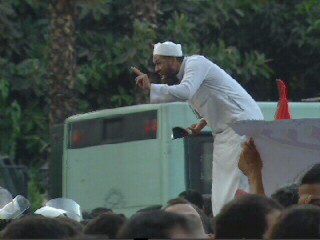 America looks to Egypt to spread democracy but it is the Muslim Brotherhood that increasingly is able to win the 'hearts and minds' of the Egyptian people.

President Mubarak is sure that the forthcoming election will be 'free and honest and transparent'. Others are not so sure. The main opposition, the Muslim Brotherhood is outlawed. Yet, they are determined to stand. Reports suggest that 155 may attempt to do so. Abandoning their old slogan 'Islam is the Solution', they now demand that 'Democracy is the Solution'. "Masses of Egyptians are suffering from poverty, tyranny, oppression. There's a real amount of anger and desire for change," states politician Ayman Nour. With the state lacking an effective social system and Egypt's close relationship with America prompting criticism, the calls for reform are getting louder.
FULL SYNOPSIS
TRANSCRIPT