It's the disease the world has been fearing. No country is prepared. Scientists now believe it's only a matter of time before another major epidemic kills tens of millions. How can we prepare? 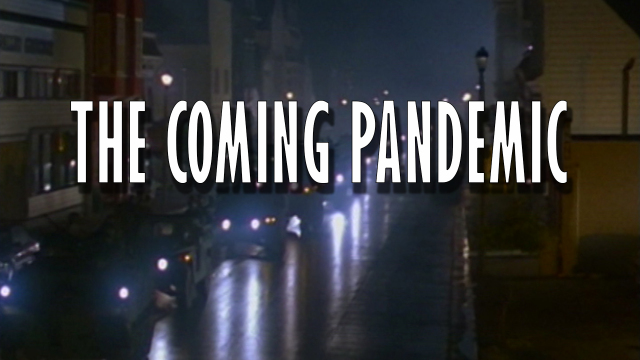 It's the disease the world has been fearing. No country is prepared. Scientists now believe it's only a matter of time before another major epidemic kills tens of millions. The most likely source is a mutation of the influenza virus, now killing birds and humans across Asia. But what would happen if such a virus struck? Can anything be done to prepare? This week's high-quality documentary investigates the threat posed by Avian flu.

"One topic dominates the news today - the bird flu pandemic sweeping the world. Already social order has broken down. There were riots at vaccination centres when stocks ran out. Gangs are roaming some inner cities as crime goes unchecked because the virus has cut police numbers by a third." This news report may be fake but it's based on America's pandemic influenza strategic plan which envisions millions dead or hospitalised. After all, it's happened before. In 1918, soldiers returning from the First World War brought a killer back home with them. "Suddenly there was Armageddon," states Prof John Oxford. "People would go home, feel ill and be dead the next morning. They essentially drowned in their own body fluids." The death rate in 1918 was relatively low compared to the number of people infected. In contrast, the mortality rate from bird flu is much higher. As Prof Graeme Laver states "It's the worst case scenario - a virus which kills half the people it infects, and which can infect millions, is going to kill millions." If such a virus struck, an unprepared health system would collapse under the strain. Major cities would close down as people stayed home to avoid contact, doing untold damage to the economy. There would be a predicted collapse in world trade and travel. "Ordinary life as we know it will cease, probably for about six months," states Australian Health Minister Tony Abbott. "It's like a Cold War situation which is very hot at the moment," explains Prof Peter Doherty. "Think of the Cuban missiles' crisis." Scientists are particularly concerned that the threat isn't being taken seriously enough. "There is no country in the world which is ready for the next influenza pandemic," complains virologist Prof John Oxford. "Of 120 governments in the world who have been asked by the WHO to prepare, about 15 have. The rest aren't bothering." So far, over 60 people have died. With each outbreak the virus is becoming more dangerous. The first human to human case was reported earlier this year. "For it to spread readily between humans, it would have to undergo a change," explains Prof Peter Doherty. If the bird flu virus were to swap genes with the human flu virus it would create a new super virus to which no one has any immunity. A vaccine for the known bird flu virus, H5N1, is perhaps only a few months away. But it's impossible to create a vaccine for the mutated super virus until the mutation occurs. And in the time it would take to create the vaccine, millions could die. Until then, scientists believe the best way to fight bird flu is with drugs like Tamiflu that halt infection. There's now a waiting list for these drugs. "Who decides who can have this drug and who can't?" questions Prof Graeme Laver. "There's going to be a big black market, fake drugs on the internet, all sorts of problems." Until the pandemic arrives, we have no clear idea what will happen. The virus may never mutate. But with so much at stake, shouldn't more be done to prepare?
FULL SYNOPSIS
TRANSCRIPT