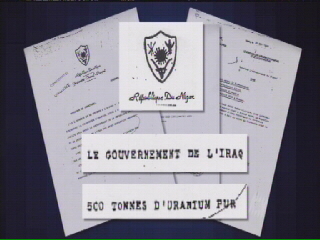 Were the faked Niger documents at the heart of the Valerie Plame affair produced by American neo-cons? What would be the ramifications of this if it were proved to be true?

When journalist Elisbetta Burba was given documents proving Iraq was buying Uranium from Niger, she was immediately suspicious. "There were many, many reasons to be doubtful", she recalls. The documents came from former Italian spy Rocco Martino. Then 'La Republica' ran a story claiming Italy's secret service were ordered to help the White House make the case for war. Vicent Cannistraro, former head of counter-terrorism at the CIA, supports these claims. "The Niger documents, which apparently were produced in America, were funnelled through the Italians." As yet, there's no concrete evidence but the scandal looks set to run and run
FULL SYNOPSIS
TRANSCRIPT