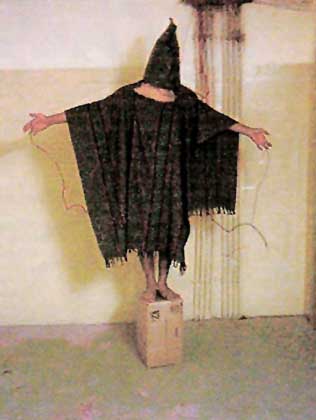 As the 'hooded man' in the infamous Abu Ghraib pictures, Haj Ali became an icon of everything that was wrong with the US occupation. He tells his story and we hear from other prisoners

"They stretched my hands in this position and attached the wires to them", states Haj Ali. "It felt like my eyes were popping out. I couldn't stand it." He spent three months being physically and psychologically tortured at Abu Ghraib. Interrogators wanted him to use his knowledge as a community leader to inform on other people. "They said 'give us the name of anyone you hate and we'll see it as co-operation and help you.'" In a nearby cell, army general Abu Maan was also being interrogated. "They stripped me and took photos of me in degrading positions", he recalls. Both men are angry that only junior officers have been disciplined for the abuse that went on at Abu Ghraib. Ilham al-Jumaili's husband Munadel was tortured to death there. It's his corpse that Sabrina Harman was photographed gloating over. "We didn't expect America to take Munadel and never return him", she laments. The victims of Abu Ghraib remain haunted by their experiences. In the words of Haj Ali "Only one thing has changed. The cameras have now disappeared The abuse still continues."
FULL SYNOPSIS
TRANSCRIPT