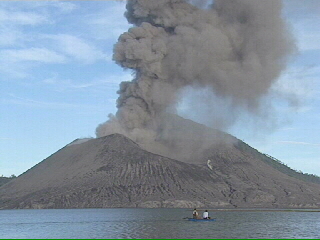 "Raboul" tells the story of an island devastated by the power of a volcano. Before the volcano erupted, Raboul was a bustling island where market traders lived comfortably alongside the families and residents they sold to. All this changed when the volcano that they had lived in the shadow of for so many years, erupted. This documentary looks at how that eruption changed the island and features interviews with residents past and present, from those that grew up on the island to those that spent the war stationed there. The film also provides a fascinating insight into the tunnels beneath the island and hears the story of the children of war veterans who built them and knew the island when it was a far less troubled place.

Shot of barren desert and plumes of smoke pouring from a volcano. Two men rowing in a canoe with the smoking volcano looming in the background Man in car driving along a barren strip of road while describing the aftermath of the volcano. Shots of initial erruption - huge lumps of rock raining down as well as massive explosions. Archive footage of Raboul pre-volcano - a bustling marketplace. Footage of the tunnels built beneath Raboul during the wat, and of two men exploring them by torchlight. Shots of the bustling town centre, shown as residents talk about how they lost their livliehood and homes. Footage of homes rebuilt after the volcano - residents desacribe the process of rebuilding the area. Shots of school children playing on a dusty track. Residents describe the difficulty of living in the shadow of the volcano. Shots of island beach covered with volcanic ash, with the volcano smoking in the background. Footage of Australian Bruce Alexandra riding horseback acorss a beach covered in black ash. Footage of the Island's capital - where much of the island's business relocated to post-volcano. Shots of island's residents discussing their reluctance to move away. Shots of a geophysicist wandering next to a lake edged with orange volcanic ash. Interview with the son of a soldier who spent the war in Raboul. Shots of a dark, cavernous tunnel opening into lush green jungle. Shots of diggers taking away what remains of some houses, followed by a final shot of the island fringed with palm trees, but with the ever-present volcano still looming in the backghound.
FULL SYNOPSIS