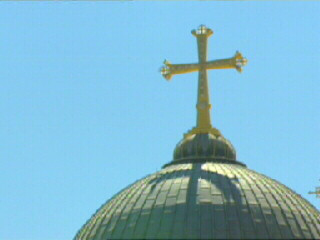 Priestly punch-ups, shady deals and a Patriarch under police protection - the Orthodox Churches of the Holy Land seem to have forgotten Christ's message of peace and goodwill to all.

For centuries, different denominations have vied for control of the Church of the Holy Sepulchre. All believe they alone should wield absolute power. "The incidents can begin with pushing, followed by violence, people beating each other up", states police officer Yoran Halevi. One monk was brain damaged after being hit with an iron bar. Adding to the scandal, the former Greek Patriarch is now under police protection, after selling valuable real estate in Jerusalem to Jewish settlers. "He brought people with connections to crime and corruption and gave them positions in the Church", complains Father Hanna. With such antics undermining the Christian message, the integrity of all Churches has taken a battering.
FULL SYNOPSIS
TRANSCRIPT