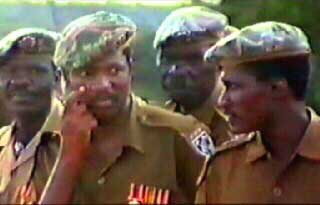 The notorious 32 Battalion - black soldiers who fought for white governments - were the shock troops of apartheid. Now the ANC wants to dismantle their retirement town and scatter the community.

The town of Pomfret may stand on the site of an old asbestos mine but it's the only home the soldiers of 32 Battalion know. When their unit was disbanded at the end of apartheid, they retired here. "This is our land ... if we are spread out I believe many of us will suffer", fears one resident. But when 70 mercenaries, many of them current or former residents of Pomfret, were arrested for attempting a coup in Equatorial Guinea, authorities acted quickly. They announced that Pomfret would be dismantled and its 3,000 residents evicted. "It's unjust", complains one former soldier. They feel they're being punished for their violent past.
FULL SYNOPSIS
TRANSCRIPT