Making of an Army

How do you build an army from scratch in a country threatening to fall apart? Hamburger and his friends are recruits in the new Iraqi army. We follow them through their training as they're moulded into professional soldiers. 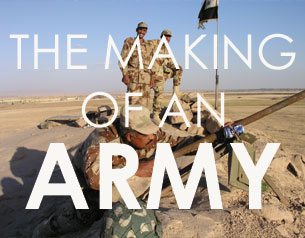 How do you build an army from scratch in a country threatening to fall apart? Hamburger and his friends are recruits in the new Iraqi army. We follow them through their training as they're moulded into professional soldiers. From learning to storm an insurgent stronghold to being sworn at and forced to have military haircuts, it's a baptism of fire for these young recruits. With its unexpected light moments and exceptional levels of access, 'The Making of an Army' is a warm look at the new Iraqi force.

At the dusty, military base of FOB Endurance, the next class of intakes have just arrived. They form sloppy lines and slouch to attention as trainers fit them with new uniforms. "I know it will be dangerous. But if I don't sacrifice myself for my country, then who will?" reasons one recruit. Hamburger, a plumpish affable young man barely out of his teens, joined for the good salary. Sgt Alvarez has only four weeks to turn these men into soldiers. Outside the base, the insurgency is raging. But the time honoured training method of yelling and swearing is less effective when recruits don't understand English. "It takes a while with the translation because the translator will not have the same tone that I have," he concedes. Interpreters often take liberties. "Americans use bad words like fucking, motherfucker, stuff like that. So we change it. 'Motherfucker' becomes 'please stand up'", confides the interpreter. In the villages nearby, recently trained Iraqi soldiers are battling insurgents. The men walk into an ambush. "We just had our first casualty - Lt Ra'ad was taken out by a sniper", states the platoon leader. They call in heavy machinery but just as the area is secured, reports come in of more car bombs. "They just keep coming at us." With so much at stake, from the very beginning of the training, discipline is strictly maintained. When a young recruit is caught skipping class, the instructors come down heavily. After ridiculing him, dirt is spilled on the ground for him to clean up. "This type of punishment is the punishment we use in the US army. We call it corrective action", explains Sgt Pratcher. At other bases, Iraqi, Kurds and Arabs are kept separate. But at FOB Endurance, they are trained in the same units. Tensions often erupt. "The Kurds snitch all the time. Every time something happens, they go and tell the Americans", complains one recruit. "Some Kurds try to fight the Arabs to increase racial tensions ... They demand separate classes and platoons." Two recruits are expelled for fighting. Soon, the Iraqi soldiers will be ready to serve in the new army. But one thing remains: the obligatory shave and haircut. "For the Americans, maybe this is normal. But we Arabs cannot shave", complains one recruit. "All the terrorists will see that I have joined the new army. We will be sitting ducks." But they're forced to comply. "You can do this the easy way or the hard way. Either way you're getting your haircuts", barks Sgt Dicker as a reluctant recruit is held down and shaved. After four tough weeks, the recruits have become new soldiers. From now on, everything they have learnt will be tested in more dangerous circumstances. Sigurd Falkenberg Mikkelsen
FULL SYNOPSIS
TRANSCRIPT