Devil and the Holy See 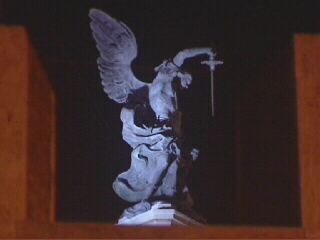 Concerned that Satan's influence in the modern world is increasing, the Vatican is renewing its campaign against the Devil. Its Chief Exorcist now performs up to 50 exorcisms a week

A woman screams and jerks uncontrollably, her eyes rolling widely. Three men hold her down while a priest performs an exorcism. Prompted by a fear the Devil's influence is increasing, the Church is stepping up exorcisms. "People are abandoning the faith, opening the way to Satan", laments Father Amorth, the Vatican's Chief Exorcist. Italy may be predominantly Catholic but it's home to at least 650 Satanic cults. The Satanic murder of two teenagers shocked the nation. "The presence of the Satanic world is fairly widespread but this was the first case involving human sacrifice", explains Lt Molinaro. It's not just the Vatican which is intent on ridding the world of evil spirits. It's facing stiff competition from freelance 'Spiritual Consultants.'
FULL SYNOPSIS
TRANSCRIPT