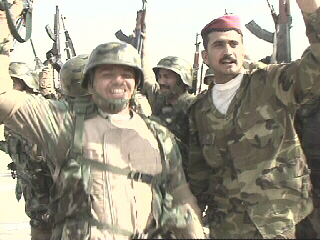 Hopes for a stable withdrawal from Iraq rest on the success of Iraqi troops like the Wolf Brigade. We exclusively profile the brigade, which is already infamous for allegedly torturing prisoners.

At a military base in Baghdad, the elite Wolf Brigade are celebrating the success of their latest mission. To loud cheering, they jump up and down in jubilation. It's a rare moment of light relief. Barely a year after they were first set up, the Wolf Brigade has already come in for heavy criticism. Critics say they've been infiltrated by Shia militias and accuse them of torturing Sunni prisoners - allegations strenuously denied by the soldiers. "I'm a Shia. But if we catch a terrorist and he's a Shia then my sense of Iraqi nationalism will stop me treating him preferentially", vows Major al Ibrahimi, Deputy Commander of Unit 1 in the Wolf Brigade. However, the discovery of nearly 200 Sunni detainees at a Ministry building last month somewhat undermines this claim. Some showed signs of torture. The Wolf Brigade may be the best equipped of Iraq's new forces but this elite unit still has a long way to go. It takes 15 minutes for them to leave their base when they receive a frantic call for help from their own General. And members still have to buy basics, like boots, with their own money. As one member states: "Why should we work hard if they don't give us what we need?"
FULL SYNOPSIS
TRANSCRIPT