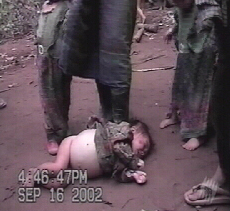 Shocking footage reveals the plight of the Hmong. Thirty years on, the Lao government is still persecuting them for supporting America during the Vietnam war.

"The Lao government is trying to use starvation and chemicals to kill us", confides a tribal elder in a desperate plea for help. Secret footage shows children dying from chemical attacks. For over 30 years, the Hmong have been hiding in jungle sanctuaries. But last year, driven by starvation and constant attacks, they took the momentous decision to surrender. "They asked if we'd create a safe zone to send the women and children to because they were too afraid to search for food", explains campaigner Ed Szendrey. He negotiated a deal with the government to enable Hmong refugees to surrender to the UN. But instead of staying away, the government sent in the army to seize the first party of refugees. Since then, nothing has been heard of their fate. "If they could, the government would get rid of every single Hmong", fears Szendrey. The failure of the first surrender means the Hmong are unlikely to come out of the jungle voluntarily. With the military closing in, it's increasingly likely they will perish in their jungle hide-outs.
FULL SYNOPSIS
TRANSCRIPT