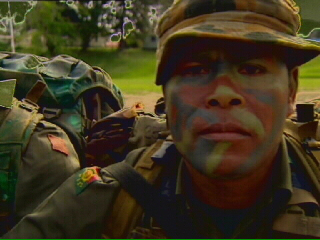 Fiji's military commander is hinting he might lead a new coup after indications that coup leader George Speight may be pardoned later this year.

The army, also known as the Green Tribe, has been involved in three coups since 1987. The last one, led by George Speight in 2000, divided the country. "The greatest challenge I have is ensuring my men's loyalty doesn't go anywhere else", explains army leader Commondore Bainimarama. He's adamant Speight should not be pardoned, despite moves in parliament to do just that. "If Speight is released, it would be 2000 all over again." The future of Fiji's prosperity could hang on the actions of Bainimarama and his men. Are they capable of meeting a provocation like the release of Speight with discipline and staying in their barracks?
FULL SYNOPSIS
TRANSCRIPT