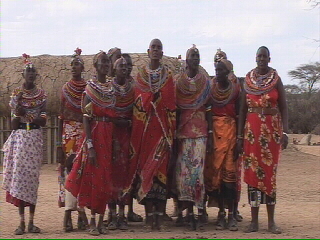 In a remote corner of one of the most patriarchal parts of the world, women are taking control of their destinies. They've founded their own village where men are banned.

Umoja could easily be mistaken for a typical Kenyan village, where women do all the work and men laze around. But there's one thing very different about it. "We don't allow men in this village. We rule Umoja", states chief Rebecca Loiosoli. Umoja was founded by women rejected by their families after they were raped by British soldiers. Over the years, they have been joined by others fleeing domestic violence. Now men are struggling to cope with all the woman's work. "We have to collect firewood and go herding. It's a big problem for men because all that is supposed to be done by women", states one man. Turning patriarchy on its head has angered the men so much, they've started to raid the women's village. "I was upset so I decided to go to the women's village and beat them because they just sit there and eat", one explains. But their attacks are easily repelled and all attempts to get the women to come back have failed. "We're not going back to the men. We're not!" declares one villager. The women are making the most of their new found freedom and are determined to hold on to their independence.
FULL SYNOPSIS
TRANSCRIPT