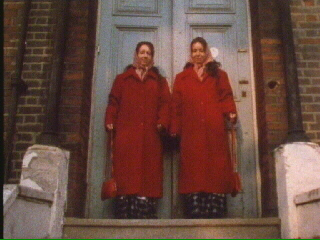 An film showing the strange lives and behaviour of Freda and Greta Chaplin, identical twins from Yorkshire, whom leave doctors puzzled as to what their condition actually is.

This 52 minute, 1980s documentary centres on the extraordinary behaviour of Freda and Greta Chaplin, identical twins from Yorkshire whom baffle doctors and social works as to why they act and live the way they do. The Chaplin sisters dress in the mirror image of each other and speak almost simultaneously are believed to have some sort of psychiatric or psychotic disorder which doctors have not been able to diagnose. Eroticism and 'Folie à deux' has been suggested to be the closest diagnosis of the twins' condition as their obsessive actions have even lead to an imprisonment and police arrests. The featured 45 year olds are said to have the mental age of 13 and live their lives, half in a condemned building, which they call 'home' and a flat the council have given them. This film is an unsolved yet intriguing insight to their strange lives.
FULL SYNOPSIS