Eye on the Child 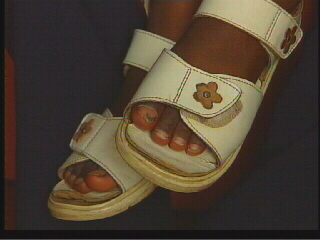 This shocking film uncovers the ever-growing crime rate of child rape in South Africa. Innocent children as young a 9 months or younger are being raped not only by strangers but mainly by friends and family of the victims parents. There motives often stem from revenge or even the promise of curing aids. What is more shocking is that the perpetrators are being released after serving short or no sentence at all with no rehabilitation or regular police checks. This film shows the outcry for justice in the countless affected communities and how the government is trying to combat this horrendous crime.

00.02.12 - Shots of a child's funeral who was murdered after a rape attack.
02:42 - Angry crowd outside a police station, calling for justice.
03:32 - Still of photograph of the child victim.
03:40 - Shots showing the police search for the body of the child.
04.16 - Shot of the charred remains of the child victim in the bush.
06.30 - Footage showing the 9-month-old baby girl rape victim in hospital.
07.24 - Riots in the streets about the anger about the growing rate of child rape.
08.23 - Shots inside a court hearing and footage shoeing the convicted perpetrator.
09.37 - Shots taken inside a South African prison.
15.40 - Still of another offender.
16.23 - Shots of Cape Town streets and its community.
18.05 - Re-enactment of events leading to the rape of a child.
18.46 - Shots showing another rapist whom has been caught by police exiting a police van.
21:13 - Community's outrage shown in a demonstration about the police handling of these rape cases.
22.50 - Footage showing an anti-rape incentive which has been created by doctors which leaves the perpetrator unable to urinate and forced to turn himself in.
24:15 - Footage of more street riots and shootings.
24:54 - Shots showing the scars on a little girls face from a previous rape attack.