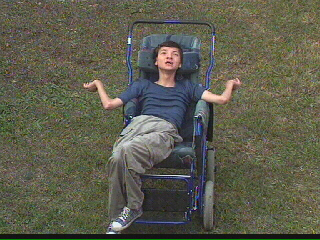 This is the story of twenty-three year old Przemek. Born unable to move or speak, he has been stuck in a wheelchair all his life, and thought by doctors to be mentally impaired until he managed to learn BLISS. Combining the use of signs with signals such as batting the eyelids or tapping his foot, he has finally found a way to express himself. This documentary reveals his poignant struggle to make himself heard. Now an award-winning poet, he recounts his feelings of entrapment and frustration at not being able to communicate with others. He also recalls his traumatic experience being moved to a nursery home as his mother could no longer take care of him. 'Disability is less of a tragedy than not being understood', he tells us. Thanks to BLISS, his craving for love and affection has found a voice.