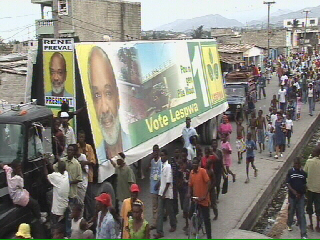 Haiti has become a failed state where the only growth industry is kidnapping. Millions live in fear of thuggish gangs who carry out the dirty work of the country's politicians.

"In some war zones, you find less violence than in the slums of Haiti", despairs Human Rights campaigner Anne Sosin. Eighty percent of the population is unemployed. For many, crime is the only way to make a living. "Two guys kidnapped me. They bought me to a room where there were a lot more people that were kidnapped", states one victim. There are claims politicians are behind most of the kidnapping. "It is very well known that members of the interim government are very, very steeply involved in kidnapping", admits one former public servant. Others accuse the UN of contributing to the unrest and are angry they have not been able to restore order. In this atmosphere of insecurity, many fear that a return to anarchy is now inevitable.
FULL SYNOPSIS
TRANSCRIPT