Killing in the Name of Allah 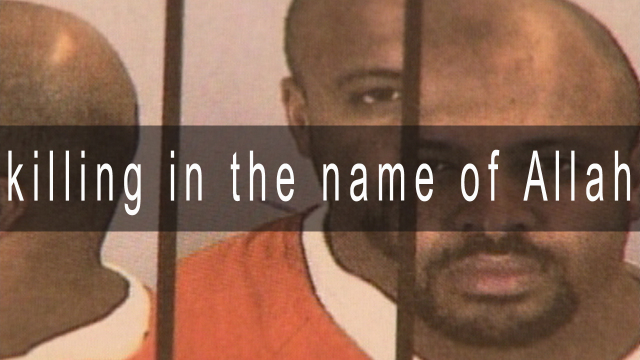 He's the man dubbed the '20th hijacker.' A self-proclaimed member of Al Qaeda now serving a life sentence for his involvement in 9/11. But how did the polite, quiet boy from Narbonne grow up to be a terrorist? What radicalised and motivated Zacarias Moussaoui? This though-provoking documentary explores the religious-ideological roots of Islamic terror. Interviews with Moussaoui's family help explain his conversion while powerful Muslim voices, like the Secretary-General of Hezbollah, comment on the links between Islam and violence.

"You carry out a deed that Allah loves and of which he approves," read a letter carried by the 9/11 hijackers. "Smile death into the face, young warriors, for you shall enter paradise." In a jail miles away, a prisoner is anxiously awaiting news of the attack. By his own confession, Zacarias Moussaoui trained to fly a plane into the White House and attended an Al Qaeda training camp. But this implacable enemy of the West hails not from the refugee camps of Beirut but from Narbonne, France. He used to believe that Islam was an antiquated religion, incompatible with French ideals, and only learnt to pray as an adult. So what provoked this dramatic conversion? Aisha el Wafi, Zacarias' mother, believes his extremism is rooted in the discrimination he experienced every day as a child. "People called my children harsh names: dirty nigger, dirty Arab. In school it was the same." Zacarias' experiences are not unusual. "There is this unease Islamic youths feel and experience", explains Sheik Mohamen Khattabi, Imam of Montpellier. "Racism, the exclusion, the feeling of being a second class citizen." Alienated from mainstream society, Moussaoui turned to religion for comfort. It's something Murad Hofmann, one of Germany's leading Muslim voices, has seen repeatedly before. "In many cases, there is a loss of identity which leads to an idealisation of religion. Religion becomes an ideology and is emptied of its spirituality." When he moved to London in 1992, Moussaoui was an ideal target for terrorist recruiters. It was here that his mother believes he met fundamentalist cleric, Abu Hamza, and converted to the strict Whabbi branch of Islam. As his brother, Abd Samad Moussaoui, states: "He went to England and changed." After quarrelled with his family and accusing them of being disbelievers, Zacarias disappeared. The next time his mother saw him, it was on the news after his arrest for terrorism. But the personal experiences of Jihadis like Moussaoui are only one factor accounting for the wave of terrorist attacks. Without developments in Islamic thought, they would have no means of justifying their actions. According to the Koran, Jihad can only to be waged against the armies of aggressors. Citizens are singled out for special protection. But by blurring the definition of 'citizen', extremists can argue their fight is entirely in line with the Koran. Thus Hassan Nasrallah, Hamas's Lebanon leader, claims that everyone is Israel is a legitimate targets because "All people in Israel are reservists." In 1998, Bin Laden developed this idea further to argue that Americans were not civilians either because their taxes funded the military. Extremists like Moussaoui believe their actions are not only sanctioned by the Koran but have God's blessing. To them, Jihad against the West, is a religious duty.
FULL SYNOPSIS
TRANSCRIPT